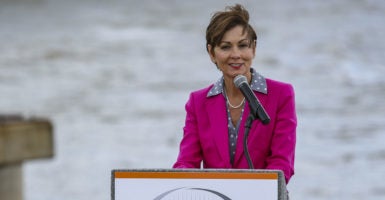 With a strong background in hospital PR and the support of Gov. Kim Reynolds, pictured here, most people thought Katherine Asjes was a shoo-in for the Iowa Board of Medicine. (Photo: Andy Abeyta, Quad-City Times/ZumaPress/Newscom)

You don’t have to be a Trump nominee to face the Christian inquisition. Just ask Iowa conservatives. The bad blood that’s turned the hearings of Mike Pompeo, Russell Vought, and Amy Barrett into anti-faith slugfests seems to be spilling over into state politics, too. And at least one military wife is out of a job because of it.

By every other measure, Katherine Asjes was “more than qualified” to join the Iowa Board of Medicine. With a strong background in hospital PR and the support of Republican Gov. Kim Reynolds, most people thought Asjes was a shoo-in. So, when her nomination failed to get the 33 votes she needed for confirmation, the one question most people had was: Why?

According to the liberals who opposed her, it was simple. She was too religious for the job. Critics, including liberal ringleader state Sen. Tony Bisignano, a Democrat, urged his party to reject Asjes because of a single comment she made on a Catholic World Report post. The article, “Re-Rebuilding a Bridge: The Connection between Contraception and the LGBT Community,” raised “red flags,” Democrats said.

Although Asjes didn’t write the column, she did tell the author that she agreed with it. And that single act, Bisignano insisted, disqualified her from the state’s Board of Medicine.

The governor’s office was stunned. “Senate Democrats voted down a well-qualified nominee who wanted to give her time and talents to the state of Iowa,” a Reynolds spokesperson said.

State Sen. Brad Zaun, a Republican, who’d been one of Asjes’ most outspoken defenders, was outraged by the other side’s bias. “I am disgusted by what has been done,” he fumed on the floor of the Senate. “She made a comment on a blog. One comment … So we bring her down, her whole family down.” Apparently, he fired back, “Freedom of speech only works on this side of the aisle.”

For Asjes, whose husband is a NATO flight officer, the decision stung. She’s never shied away from her conservative roots, explaining that her “beliefs on marriage are in line with traditional mainstream views” and Catholic teaching. None of that, the Constitution would argue, should disqualify someone from public service. “I think that this speaks to a lack of open-mindedness and the intolerance of Democrats,” Asjes said after the vote.

For hundreds of years, we’ve been a country that’s not only been proud of our differences, but thrived off them. Now, as far as these liberals are concerned, believing as almost half of Americans do can cost you a seat at the government table.

It’s time for the left to stop penalizing people of faith. No one should be required to choose between their career and their convictions.