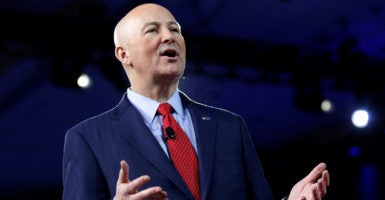 The governor of Nebraska has signed a budget bill that defunds Planned Parenthood and other abortion providers in the state.

“There is no ‘carve out’ for any organization in the budget language,” Taylor Gage, director of strategic communications for Ricketts, told The Daily Signal in an email. “No organization can use Title X dollars to provide abortion services, including counseling or referrals.”

Ricketts praised the restrictions on funding abortions, as well as fiscally responsible aspects of the budget, in a statement released Wednesday.

“The budget adjustments I have signed help to further control state spending,” Ricketts said. “Additionally, these bills contain important new budget language, which ensures that Title X taxpayer dollars do not fund abortion services, including abortion referrals, at any clinic in Nebraska.”

Today, I signed new #prolife budget language into law. This provision ensures that Title X taxpayer dollars do not fund abortion services, including abortion referrals, at any clinic in Nebraska.

Nebraska is the only state with a one-chamber legislature.

In a statement released Thursday, the Planned Parenthood Federation of America said it would continue to oppose the restriction.

“Planned Parenthood has vowed to fight to continue serving patients who need access to affordable reproductive health care, no matter what,” the abortion provider’s statement read.

Monica Burke, a research assistant in the DeVos Center for Religion and Civil Society at The Heritage Foundation, said any institution that performs abortion should not receive taxpayer money.

“Taxpayers should not be forced to fund Planned Parenthood, one of the largest abortion providers in the country,” Burke said. “Such funding should instead be directed toward the thousands of centers that provide health care for women without entangling government with the abortion industry.”