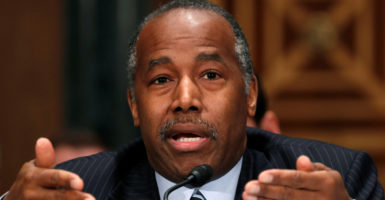 "Some people are comfortable with the system and will demonize you," says Housing and Urban Development Secretary Ben Carson, here testifying March 22 before the Senate Banking Committee. (Photo: Kevin Lamarque/Reuters /Newscom)

Housing and Urban Development Secretary Ben Carson, who has faced intense scrutiny and even calls for his ouster over a furniture order, said in an interview with The Daily Signal that his reforms at the agency prompted such pushback.

“I have no intention of going anywhere,” @SecretaryCarson says.

“When you go about change, some people don’t like change,” said Carson, a renowned brain surgeon before entering political life. “Some people are comfortable with the system and will demonize you. I experienced that in my medical career when I pushed the envelope.”

“If you don’t disturb things, no one is going to hoot and holler,” he added in the interview Monday.

Over the last year, Carson said, he implemented changes at the Department of Housing and Urban Development to focus on helping recipients of government aid become more self-sufficient, deregulating where possible, and strengthening partnerships with the private sector.

President Donald Trump nominated Carson, a former rival in the large 2016 field of Republican presidential candidates, to be the nation’s 17th secretary of housing and urban development.

HUD, which currently has a $40 billion budget and more than 8,000 employees, was established in 1965 to provide housing for the poor as one of President Lyndon Johnson’s “Great Society” programs.

HUD programs include rental and mortgage assistance, but have grown over the years to touch on environmental, health care, and employment issues.

Carson, 66, recently has pushed financial integrity reforms, which he said is largely in response to the controversy over HUD’s order of a $31,000 mahogany dining room set for his use.

“I have no intention of going anywhere,” Carson told The Daily Signal.

During a hearing of the Senate Banking, Housing, and Urban Affairs Committee last month, Warren said that “scamming the taxpayers is a scandal.”

The Massachusetts Democrat contended that under Carson, HUD is not preventing housing discrimination, saying, “that’s the scandal that should get you fired.”

Also last month, Democrats who are members of the Congressional Black Caucus wrote a letter to Carson criticizing plans to change wording in the agency’s mission statement.

Carson said he is pushing more oversight of HUD expenditures to try to prevent a recurrence of something like the furniture purchase.

“We were already concerned about the weakness of the financial structure for the past several decades. The furniture issue made us focus on it close to home,” Carson said. “We still don’t know who OK’d that purchase. It went through 50 different people.”

Carson told the House Appropriations Committee in March that he and his wife had looked at a furniture catalog while considering redecorating his office, but left details to staff. He said they were both surprised upon seeing the price tag for the dining room set, and canceled the order.

“I’m excited to apply a business acumen to a task that is necessary for us as an agency,” Dennis said in a public statement. “These new internal controls and management practices must be embedded into our organization to help prevent misuse and misappropriation of assets. The goal is to create more robust processes and systems of checks and balances to ensure our expenditures not only meet all of our requirements but pass a common sense ‘smell test.’”

The new financial integrity plan moves beyond addressing problems such as the furniture and will consist of ensuring agency-wide oversight; restoring more accountability for financial reporting; and modernizing the grant process, according to a HUD press release.

HUD already has undertaken efforts to reduce improper payments, firing 41 inspectors in 2017 for not doing their jobs properly, according to the department. It also made changes to avoid a taxpayer bailout of the Federal Housing Administration and ended the Property Assessed Clean Energy loan program.

“I would call it a more logical agenda that makes sense, as opposed to any ideological agenda,” Carson said in the interview.

On another major front of reform, Carson said he plans to open 10 more EnVision Centers across the country in 2018. The centers, located in public housing facilities, leverage private money for education, job training, financial literacy, and mentoring programs.

This is part of the four pillars of self-sufficiency that HUD is promoting, Carson said: character and leadership, educational advancement, economic empowerment, and health and wellness.

Carson stressed that the EnVision Centers are about breaking intergenerational cycles of poverty. Examples, he said, include linking single mothers with child care resources so they can complete their education and matching volunteer mentors with those who need mentors.

“When you go to disadvantaged areas and ask young people what they want to do when they grow up, you often get a blank stare, or they name two or three things when there are 1,000 things,” Carson said in the interview. “We have to introduce them to the other 995 options and how to get there.”

“We have asked department heads to evaluate every regulation,” Carson said. “I’m not one who thinks there shouldn’t be any regulations. It’s not so much they were put in place by bad people. They meant well. [But] they are not weeding the garden, and it is turning into a jungle.”