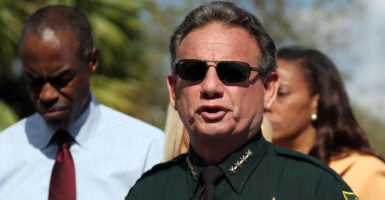 All of the glaring red flags surrounding the Parkland shooter were ignored.

Authorities failed to connect the dots through years of bad behavior, incidents on and off campus, as well as reports from concerned citizens that the shooter was displaying worrisome behavior.

According to a CNN report, the Marjory Stoneman Douglas High School shooter even used to introduce himself to people by saying, “Hi, I’m Nick. I’m a school shooter.”

He should never have been able to pass a background check when he acquired his weapon if he had any kind of criminal record that seemed to be highly warranted.

Though protests and media coverage have focused almost entirely on the issue of gun control, it’s not hard to see how had other measures been taken the shooter could have been stopped well before he was able to commit mass murder.

A recent case in Kentucky shows how we can sometimes stop these incidents long before violence takes place, and without stripping people of their constitutionally protected rights.

Police arrested a student at Paul Laurence Dunbar High School in Lexington, Kentucky, in February after they identified a series of warning signs about his behavior.

The case began when the police received an “anonymous tip to a school safety tipline,” according to the Lexington Herald Leader.

The tipster told police that the student, Timothy Felker, had been making threats to shoot himself, specific students, and people at his school more generally.

After allegedly purchasing a firearm with money his mother gave him for a tattoo, he posted pictures on social media of putting a gun in his mouth.

Police arrested Felker at an airport after getting a mental health petition, and authorities charged him with “terroristic threatening,” WKYT reported.

Unlike with the Parkland shooting, authorities followed up on warning signs, and arrested a clearly troubled teen before an incident took place.

“This is an example of best practices in action,” Fayette County Schools Superintendent Manny Caulk said, according to the Herald Leader. “It’s about connections with students and multi-agency collaboration. The speed at which we’re able to share information is a reflection of the systems we have built to link students, school, and district administrators with law enforcement officers at the school, city, and federal level.”

The laws worked and concerned citizens and authorities intervened.

The Kentucky situation gets to the point that to prevent violence at schools, we need to do better as a society in identifying the warning signs and cultural maladies that are leading people to commit these horrible crimes.

As Amy Swearer, The Heritage Foundation’s visiting legal fellow at the Meese Center for Legal and Judicial Studies, wrote, there are three common traits of school shooters.

The first common trait is that they are often people with a serious mental illness.

“It is not uncommon for a school attacker to have acted in increasingly disruptive and violent ways before the shooting,” Swearer wrote. “But for a variety of reasons, these individuals are often not involuntarily committed to a mental health institution or ordered by a court to receive mental health treatment.”

The second trait is fatherlessness and broken homes.

As Emilie Kao, The Heritage Foundation’s director of the Richard and Helen DeVos Center for Religion & Civil Society, wrote:

Among the 25 most-cited school shooters since Columbine, 75 percent were reared in broken homes. Psychologist Dr. Peter Langman, a pre-eminent expert on school shooters, found that most came from incredibly broken homes of not just divorce and separation, but also infidelity, substance abuse, criminal behavior, domestic violence, and child abuse.

Unfortunately, very little was said about these issues at the March for Our Lives rally. Protesters blamed the National Rifle Association and gun ownership for violence rather than the killers themselves, or the cultural dysfunction that may be feeding their lives of crime.