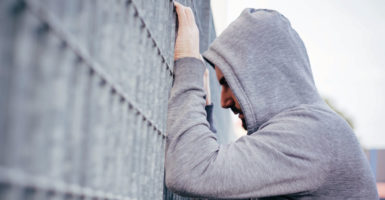 School shooters tend to show signs of mental illness and are marked by a broken family life and economic insecurity. (Photo: tommaso79/Getty Images)

It’s time to get serious about school safety.

Nearly 20 years separate the horrible tragedies at Columbine High School in Colorado and Marjory Stoneman Douglas High School in Parkland, Florida. In that time, too little has been done to make our schools safer.

That’s why our grieving nation is again searching for a solution. If America is ready to get serious about school safety, we need to focus on a range of pressing issues—including mental health, family breakdown, culture, media, and more.

Our children and grandchildren deserve to be safe at school. We can’t allow another tragedy to occur. It’s time to set aside political agendas and get serious about school safety.

That’s why we just published a comprehensive Heritage backgrounder, “Focusing on School Safety After Parkland.” Each op-ed in this series highlights one aspect of that paper, which provides real solutions to this complex problem.

What do school attackers have in common? Several things.

In addition to often exhibiting signs of increasingly violent and dysfunctional behavior, they are significantly more likely than the average population to suffer from undiagnosed or untreated mental illness; they often come from broken homes; and their shootings may be related to economic insecurity.

Let’s take a closer look at these factors.

Even when serious mental illness is not present, school attackers almost always exhibit common traits of extreme resentfulness, anger, and a desire for revenge because of perceived social alienation.

It is not uncommon for a school attacker to have acted in increasingly disruptive and violent ways before the shooting. But for a variety of reasons, these individuals are often not involuntarily committed to a mental health institution or ordered by a court to receive mental health treatment.

It does mean, however, that the early identification and treatment of students with mental health disorders is of particular importance in reducing large-scale violent attacks at schools.

School attackers often “leak” their intentions to their peers, whether in person or via social media.

One of the Columbine attackers wrote online blogs that included statements about his desire to kill those who annoyed him, as well as specific violent threats directed against his classmates and teachers.

Before gunning down 17 students in Florida, the Parkland attacker was reported to the FBI for a YouTube posting in which he bragged about becoming a “professional school shooter.” He also reportedly joked to classmates on numerous occasions that he would be the one to “shoot up a school.”

It is also not uncommon for school attackers to show more indirect warning signs, such as an unhealthy fixation on firearms, writing projects focused on grotesque violence, or praising other infamous school attackers.

It is essential that teachers and other school professionals be attuned to these warning signs and take appropriate action up to and including engaging with outside mental health professionals and local law enforcement officials.

Familial dynamics may also play a role in the early detection of students on the verge of committing catastrophic acts of violence.

Sadly, a majority of school attackers come from broken homes, often growing up with absent fathers or in the midst of divorce or domestic violence.

The Parkland attacker, who was raised alone by his adoptive mother since the age of 6, was merely the latest in a long line of troubled young men who grew up in less than ideal family situations.

The young man who killed his grandfather before murdering seven of his classmates at Red Lake Senior High School had parents who never married, a father who shot himself, and a mother and stepfather who divorced. He also lived with a grandmother who was separated from her husband.

This does not mean that all students with difficult home lives should be considered potential school attackers or that students with intact, stable families should have troubling behaviors overlooked or dismissed.

It may mean, however, that holistic approaches to school safety should include an appreciation of the impact that a chaotic family life can have on a student’s feelings of desperation and violent actions.

>>> The Crisis of Fatherless Shooters

The unfortunate fact that broken family relationships are often associated with greater risk factors for youths is nothing new. For decades, study after study has shown that stable, intact families play a vital role in developing thriving children and adolescents.

Adolescents living in intact families are less likely to exhibit violent behaviors or engage in physical fighting, and youths in fatherless homes are significantly more likely to be incarcerated than are those from two-parent homes.

Several studies have found that adolescents from intact families tend to report lower levels of emotional and psychological stress, while those who do not live with both biological parents are more likely to exhibit psychological affective disorders such as hyperactivity, irritability, and depression as adults.

The importance of having actively involved fathers and father figures cannot be overstated when it comes to the mental and emotional development of children. Fathers are important role models for sons. They play a key role in helping to maintain authority and discipline in the home. They help with self-control and feelings of empathy toward others—key character traits violent youth often lack.

Psychologist Marsha Kline Pruett notes that “[f]athers tend to be more willing than mothers to confront their children and enforce discipline, leaving their children with the impression that they in fact have more authority.”

A major study by criminologists at Northwestern University looked at the effect of economic conditions on the prevalence of school shootings and concluded that there is a significant correlation between periods of increased economic insecurity and periods of increased gun violence at schools.

The findings are particularly robust in that the effects are seen across several different economic indicators, and the relationship remains even when analyzing the data on national, regional, and city levels.

The researchers noted that the results of this study are in line with other evidence that joblessness is related to low self-esteem and detrimental behavior, that minors are responsive to the unemployment of their parents, and that the attitudes of youths have a significant impact on their future economic outcomes.

They further posited that “gun violence at schools is a response, in part, to the breakdown of the expectation that sustained participation in the educational system will improve economic opportunities and outcomes.”

This suggestion is profound in the context of the backgrounds of many individuals who commit violent attacks at schools and were either struggling to finish or failed to finish their educations, and had limited future economic opportunities.

For example, the Sandy Hook attacker was removed from high school by his parents due to sensory integration disorder, failed to obtain a degree after attending classes at Western Connecticut State University, and was unemployed without any likelihood of holding a job in the near future.

The Parkland attacker had been expelled from high school for disciplinary problems, was taking adult education classes to get his GED, and worked at a Dollar Store.

The Isla Vista attacker graduated high school but dropped out of a local college within a year and was investigated by local law enforcement because of concerns about the state of his mental health.

Real solutions to problems start with facts, and the fact is that school shooters often share the same traits—traits that are not connected to or related to guns.

If we are going to get serious about school safety, we must soberly acknowledge the fact that mental illness, broken families, and economic insecurity all play a role in many, if not most, school shootings.

Addressing those societal ills, with proven strategies, will help reduce not only school shootings, but other violent acts by at-risk youth.