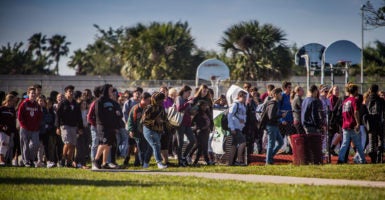 It’s time to get serious about school safety.

Nearly 20 years separate the horrible tragedies at Columbine High School in Colorado and Marjory Stoneman Douglas High School in Parkland, Florida. In that time, too little has been done to make our schools safer.

That’s why our grieving nation is again searching for a solution. If America is ready to get serious about school safety, we need to focus on a range of pressing issues—including mental health, family breakdown, culture, media, and more.

Our children and grandchildren deserve to be safe at school. We can’t allow another tragedy to occur. It’s time to set aside political agendas and get serious about school safety.

That’s why we just published a comprehensive Heritage Foundation backgrounder, “Focusing on School Safety After Parkland.” Each op-ed in this series highlights one aspect of that paper, which provides real solutions to this complex problem.

The major question posed by worried parents: “How likely is it that my child will be killed by a firearm at school today?”

Thankfully, the answer is that firearm deaths on school campuses are incredibly rare.

As a public policy matter, however, how we define the problem should dictate how we understand and respond to it.

One of the main problems with analyzing the relative safety of schoolchildren in America is the lack of a standard definition of what type of incident constitutes a “school shooting.”

Different organizations have compiled data sets using a wide variety of standards for inclusion, and this has resulted in significant confusion about the scope of the danger posed to children by guns on school campuses.

For example, the gun control advocacy group Everytown for Gun Safety makes the dramatic claim that 18 school shootings occurred during the first six weeks of 2018.

But Everytown uses an extremely broad definition of the term “school shooting” and includes all incidents in which “a firearm was discharged inside a school building or on school or campus grounds.”

It includes accidental discharges, suicides, incidents that did not result in injury, and shootings that took place outside of school hours involving persons unaffiliated with the school.

The “18 school shootings” include an incident that occurred between nonstudents in a high school parking lot at 8 p.m., well after school hours, in which no one was injured.

Everytown also counts an incident in which a 31-year-old man shot himself in the parking lot of a closed-down elementary school.

In other words, the “18 school shootings” claim, while certainly attention-grabbing, is misleading and does little to answer the major question posed by worried parents: “How likely is it that my child will be killed by a firearm at school today?”

In contrast, since 1992, the National Center for Education Statistics has tracked “school-associated violent deaths,” including a subcategory of “homicides of youth ages 5-18 at school.” This provides a much more accurate—though not perfect—indication of how safe children are on school property during school hours.

One of the drawbacks, however, is that the National Center for Education Statistics does not distinguish between firearm-related and nonfirearm-related homicides. Nor does it include violent deaths that occur on college campuses.

Similarly, the FBI records “active shooter situations” on school grounds, defined as “an individual actively engaged in killing or attempting to kill people” on school property.

The FBI breaks the incidents down by location (whether it occurred at a primary, secondary, or higher education facility), gives information on the context of the active shooter situation, and records resulting fatalities and injuries.

Like the National Center for Education Statistics data, this information is useful for understanding school violence, but its limitations must also be taken into account. Although it’s helpful to understand the number of times each year that individuals undertake to harm others with a firearm on school property, not every active shooter incident indicates an attempt to kill students on a Columbine-esque scale.

Statistically speaking, however, such events are still highly infrequent.

In particular, shootings during normal classroom hours that result in injuries or death are incredibly rare in America’s primary and secondary schools.

Out of the more than 55 million K-12 students across the nation’s public and private schools, an average of 10 students are killed every year by gunfire at school. That is 10 students too many, but to put this number in perspective, more than 800 students die every year during regular travel to and from school.

Even rarer on K-12 campuses are the types of high-profile, multiple-casualty shooting rampages as exemplified by Columbine, Sandy Hook, and Parkland.

Since 1990, America’s 100,000 public primary and secondary schools have experienced 22 on-campus shootings that resulted in two or more fatalities (excluding the shooter), for an average of less than one multiple-fatality shooting per year.

Most of these multiple-fatality shootings were not “Columbine-style” mass shootings. Of the 22 incidents since 1990, only nine involved the deaths of four or more people.

Since 2000, and including the March 20 incident at Great Mills High School in Maryland, there have been 18 shootings at K-12 schools that resulted in two or more injuries.

Statistically, schools are the safest places for America’s children to be at any given time.

While none of this is meant to underestimate the tragedies that have occurred or the urgent need to address them, America’s primary and secondary schools are safer than they have been in decades, and violent deaths of any kind rarely occur on school property.

Four times as many children were killed in schools in the early 1990s than are killed today, and the number of shooting incidents involving students has been declining steadily for the past 30 years.

The percentage of students carrying weapons to school also appears to be dropping, and during the 2014-2015 school year, the national rate of firearm possession incidents at school was three per 100,000 students for a total of 1,500 incidents.

Less than 3 percent of all youth homicides occur on a school campus, even though it is where youths spend a large portion of their time.

Since 1992, when the National Center for Education Statistics began to compile data on school-related violent deaths, the highest number of on-campus student homicides at K-12 schools in a single school year has been 34, which occurred during the 1992-1993 and 1997-1998 school years.

During the 2013-2014 school year, the center concluded that there was approximately one student homicide or suicide at school for every 2.8 million enrolled students.

Meanwhile, an average of 50 children ages 7 to 18 are killed by their parents every year.

Sadly, this means school-age children are roughly five times more likely to be killed by their own parents than they are to suffer a violent death while at school.

No amount of data will make the deaths of students easier to bear when they occur. But nervous parents can still find some peace of mind in the reality that these deaths are so shocking and so difficult to comprehend in part because they are so rare.