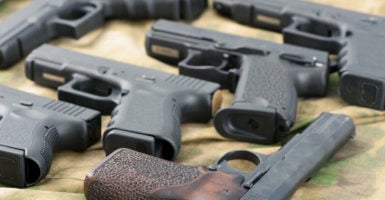 The federal agency didn’t fire anyone for lost or stolen firearms, although one agent retired after a revolver in his care was “thrown in a landfill.” (Photo: sundrawalex/Getty Images)

More than 23 firearms issued for agents of the Bureau of Alcohol, Tobacco, Firearms and Explosives were either were lost or stolen between 2014 and 2017, a government watchdog reported Monday.

A total of 26 weapons were reported lost, stolen, or missing, though three were lost or stolen during shipment, including one used in a crime, according to the Department of Justice’s inspector general. Of the 26, agents recovered 15.

Inspector General Michael Horowitz noted that the number of guns lost during those years was “a substantial improvement” compared to what auditors found in 2008.

The inspector general did not indicate what kind of crime the stolen revolver was used in, but indicated that ATF determined that the firearm was properly stored in a gun safe at the time of the theft. The weapon was recovered during a search warrant and the responsible agent was cleared of wrongdoing.

ATF didn’t fire any agents for having their firearms lost or stolen, though one retired after a revolver in his care was “thrown in a landfill.” The gun was not recovered. Government officials frequently retire when eligible during investigations to avoid termination and to keep their benefits.

Most of the agents faced suspensions, though they were usually for five days or less, while three agents received other forms of discipline, such as counseling.

One agent faced a 25-day suspension after losing a revolver that he ultimately found in his personal car. Another was issued a 10-day suspension for leaving his briefcase containing a pistol on the metro. A metro employee recovered the weapon.

Another agent was given a four-day suspension after he left his pistol on his car, which his neighbor recovered.

One agent was “counseled” after a rifle in his care went missing and was found in an ATF storage room.

Two other agents lost and found their pistols in their homes. One was not punished, while another was issued a “caution,” the inspector general report said.