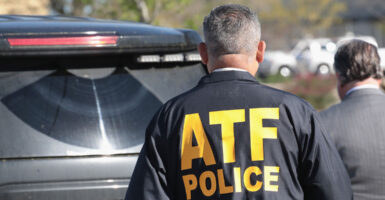 Under pressure from dozens of congressmen, the Bureau of Alcohol, Tobacco, Firearms and Explosives withdrew guidance on a proposed regulation that gun industry leaders warned would cost them billions.

The ATF’s decision to pull its regulation regarding pistol braces follows a cooperative effort from 90 House members who demanded that the agency cease its “alarming” determination that “could turn law-abiding gun owners into criminals overnight.”

About 80 firearms manufacturers told Senate Majority Leader Mitch McConnell in a Saturday phone call that the ATF’s proposal would cost them upward of $2 billion if it went into effect, The Washington Free Beacon reported, citing several participants in the conversation. It wasn’t clear how the manufacturers calculated that figure.

Pistol braces, which are designed to stabilize a shooter’s arm for one-handed firing, allow a buyer to obtain a rifle-style weapon with a short barrel length without the $200 tax fee and waiting period that a traditional short-barreled rifle would incur, according to Gun News Daily.

The ATF’s regulation would have reclassified weapons with pistol braces based on the weight of the firearm, the caliber, the presence of a secondary grip, and other factors that the agency determined would make the weapon more akin to a short-barreled rifle.

Reclassification of the devices could turn those in possession of weapons with pistol braces into owners of short-barreled rifles, which are illegal to own without the proper registration and paperwork under the National Firearms Act.

The move could have criminalized between 3 million to 4 million gun owners in addition to the $2 billion price tag projected by manufacturers, the Beacon reported.

In a document obtained by the Beacon, the ATF wrote:

Upon further consultation with the Department of Justice and the Office of the Deputy Attorney General, ATF is withdrawing, pending further Department of Justice review, the notice and request for comments entitled “Objective Factors for Classifying Weapons with ‘Stabilizing Braces'” that was published on Dec. 18, 2020.

The firearms bureau received more than 67,000 comments from the public regarding the regulation. The Daily Caller News Foundation reviewed more than 100 of the comments, none of which favored the proposal.

Pro-Second Amendment groups count the ATF’s withdrawal as a victory, but the organizations, including the Firearms Policy Coalition, remain wary that the agency could promote another regulation scheme in the future.

“The ATF’s withdrawal of their proposed guidance should be the end of the road for this assault on lawful accessories and law-abiding gun owners, but we know better,” Adam Kraut, director of legal strategy for the Firearms Policy Coalition, said in a press release. “FPC will continue to carefully monitor and evaluate ATF policies and enforcement practices for violations of the law and our Constitution, and as we have before, rapidly respond with forceful and appropriate action.”