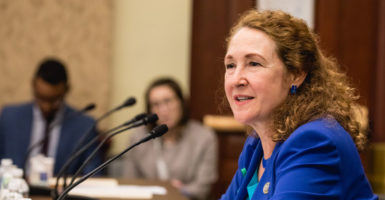 The chief of staff to Rep. Elizabeth Esty, D-Conn., allegedly abused and sexually harassed a female staffer for several years, culminating in a May 2016 threat to kill her. (Photo: Cheriss May/ZumaPress/Newscom)

Rep. Elizabeth Esty, D-Conn., kept her chief of staff on the job for three months after he was accused of punching and threatening to kill a female staffer, and then recommended him for his next job, according to news  reports.

Esty’s former chief of staff, Tony Baker, allegedly abused and sexually harassed the female staffer over several years, culminating in a May 2016 threat to kill her.

The Washington Post identified the former staffer as Anna Kain.

Esty found out about the incident within a week, but chose to keep Baker in his paid position for another three months, the Post reported.

Esty admitted Thursday that she “failed to protect” Kain from Baker. Her office gave Baker a $5,000 severance payment when she fired him in July 2016.

The congresswoman later recommended Baker for a position at Sandy Hook Promise, the Hartford Courant reported. Baker was dismissed from his position at the nonprofit last week, according to the Post.

The Republican Party’s Connecticut state chairman, J.R. Romano, called on Esty to resign for keeping Baker in his position and then vouching for him.

“She wrote [Baker] a glowing recommendation and helped him get another job after he was known to be abusive,” Romano told the Courant. “The Democratic Party in this state needs to join me in calling for Elizabeth Esty to resign.”