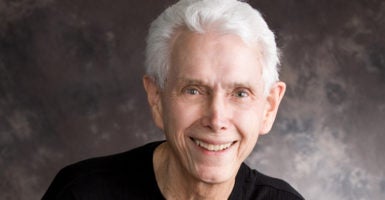 "I started out as a transgender kid, at least they would say that today, at 4 years old," Walt Heyer says. "The problem is that they're diagnosing kids like I was with gender dysphoria when they don't have gender dysphoria." (Photo courtesy Walt Heyer)

Walt Heyer, who used to live as a transgender woman, now travels the country speaking about his experiences and reaching out to those who regret their own gender change.

The Daily Signal spoke with Heyer on camera about his story, as well as the lies he says society and the media tell young people today about gender. An edited transcript of the interview, conducted last month at the Bringing America Back to Life convention in Independence, Ohio, is below the video.

Rachel del Guidice: I’m joined today by Walt Heyer, a former transgender person. And he’s here today to tell us a little bit about his story. Can you run through the highlights of where you were at years ago, and then why you are here today at a pro-life conference talking about your story?

And so it led me to a point of thinking that I needed a gender change. And then one of these experts in gender dysphoria diagnosed me with gender dysphoria and said I needed hormone therapy and surgery. As you can see from standing here, they were totally wrong because I was born a boy.

And I went through all the surgery and became Laura Jensen and lived eight years as a female to discover that nobody needs to change genders. It’s absolutely a totally bogus procedure, not only from the standpoint of hormone therapy and surgery. The people are suffering from comorbid disorders that need to be addressed and treated; and if they did so, we wouldn’t have any transgenders.

Del Guidice: We see the media highlighting stories all the time of LBGT activists and others.  … Their stories are championed, about them kind of rejecting who they were and becoming a different person, another gender. Would you say that you have a similar experience with media paying attention to your story?

Heyer: The media doesn’t pay any attention to me at all, because it doesn’t fit their narrative. And so it’s much more fun for them to promote LGBT activist people and put them on the front cover of magazines and make a big to-do about it.

The fact of the matter is, there isn’t one person, not one doctor, not one psychiatrist, not anybody [who] can even prove one transgender even exists beyond the fact that they say they are. Which is why it’s a psychological disorder and it’s not a medical disorder, and it doesn’t require medical surgery to treat. They just need psychotherapy.

Heyer: Well, I realized that schools have popularized changing genders, and it’s more of a fad today than a reality in terms of people actually having gender dysphoria. So I think the kids need to get sharp.

I mean, kids are really sharp and if they sit down and look and ask for the information on what proof does anybody have that gender dysphoria exists … the youth themselves in our schools could actually end this nonsense in a heartbeat.