Daily Signal Exclusive: Mercedes Schlapp on What the Media Doesn’t Tell You About Trump 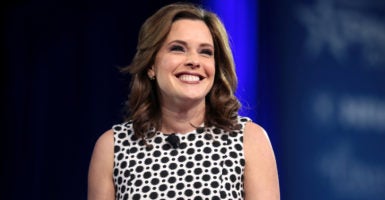 "The president is providing a message of hope. And saying that America is strong," says Mercedes Schlapp, director of strategic communications at the White House. (Photo: Gage Skidmore/Flickr)

Mercedes Schlapp, the White House director of strategic communications, speaks to The Daily Signal’s Rob Bluey about the media’s coverage of President Donald Trump and the administration’s top priorities in 2018. Schlapp attended the White House’s Generation Next event with millennials Thursday. An edited transcript of her Daily Signal interview is below.

Rob Bluey: You work in communications at the White House. You see every day how the press corps is covering this president and the work that you’re doing in this administration. What’s the one thing our audience should know that isn’t getting covered?

Mercedes Schlapp: First of all, I have to say the president is the communications director for all intents and purposes. What I think is very important is that there’s so much of this source, that source, palace intrigue, and the reality is that what the president is accomplishing from a policy standpoint is so historic and outstanding, even through the conservative lens.

You look, for example, at what the president was able to accomplish with the tax cut legislation last year that has gone into effect and the immediate impact that we saw through thousands of businesses coming out, rising wages for workers, and really having a significant impact on American lives. We’ve created 4 million jobs; that is significant. This is an economy that is fueled and ready to go and ready to launch and I think what we’re seeing is a very strong economy as we continue through the year.

Bluey: Let’s take some of those policy issues and talk about them. You brought up the economy and jobs. Where do we go from here? Obviously, tax reform was a huge accomplishment in 2017. What are some of the things that you have in your sights here at the White House about how you take the next steps?

Schlapp: As we look at the economic success story, there’s three buckets to it. There’s the tax cuts, we’ve just talked about, there’s a deregulation agenda, which as we know, the president, his administration, has superseded what they thought we were accomplishing. They went from two to one in removing regulations to over 13, 14 regulations they’ve taken out per regulation that’s in. So, there has been significant progress made in these agencies and that has impact.

It has an impact in our business community, especially our small businesses and, quite frankly, it saves the government billions of dollars, as well. In addition to that third bucket of infrastructure, that’s been one of the priorities for the president. It’s actually now going through Congress in terms of where it’s going to end up.

As we know, one of the key things that the president is pushing is that of public-private partnership. We don’t want to spend trillions and trillions of dollars like the Democrats want to do. We want to do this is in a cost-effective manner, but, at the same time, have streamlined processes in place so that projects don’t take 10 years, they take two years to get approved and get done. There is a real need to have investment in our infrastructure because that’s what helps us to compete globally and also it’s been neglected for so long.

Bluey: One of the president’s other priorities is giving the military a big boost in funding. At the same time, this bill that’s going through Congress, the omnibus, a lot of conservatives today in the House voted against it. How does the White House view it?

Schlapp: Let’s remember that Congress, it’s just dysfunctional in terms of its budgeting process. For way too long, the president, last year he submitted his budget, they didn’t end up voting on it. This is time and time again, they’ve gone from short-term spending after short-term spending.

That just creates so much instability, especially when it comes to our military. So, when we were able to negotiate on the budget caps, now we’re obviously going through the omnibus bill. It’s a painful process. It’s ugly. It’s a lot of spending. But, at the same time, there’s so many of these priorities that are being funded, that being of the national military.

So, it’s very clear for the president that one of the things that the military needs to know is that they’re able to spend time planning long term and when they don’t have these funds when they go from short-term spending bill to short-term spending bill, they’re not able to plan and really be prepared for the global threats that we’re experiencing.

I mean, you’re talking about North Korea, we’re dealing with a very sensitive international issue where we want to get to a point that we can denuclearize North Korea. That’s also assuring that we continue on our fight against ISIS. Those are priorities to ensure that we can stop terrorism dead in its tracks.

Bluey: One of the other areas where there has been some dysfunction in Congress has been Democrat obstructionism of the president’s nominees. There are well over 100 who are waiting for confirmation, obviously a lot of judges in that mix as well. What is the White House planning to do to ratchet up the pressure to get those done?

Schlapp: The president has talked about this. This is a priority for the administration. Our Cabinet secretaries are going on the Hill, talking to Democrats, saying we need our nominees to be confirmed. It’s taken way too long.

This is something that is why the president has talked time and time again. Get rid of the filibuster, he just mentioned it in the millennial event today, which is the idea that the Senate can just be controlled by these small groups of Democrats and not allowing our nominees to go through.

As we know, the president has been a champion in terms of ensuring that we have conservative judges in place, starting with our Supreme Court justice pick of Neal Gorsuch, but also being able to pass through so many and get confirmed so many of our nominees, our judicial nominees, as we know, it’s a long-term investment for our courts.

Bluey: We are here at the White House for the Generation Next event with millennials. What is the message that this administration has for this millennial generation?

Schlapp: The president is providing a message of hope. And saying that America is strong. It’s not only about the “America first” message but is that of having so much pride in America. I think millennials get a lot of bad raps in a lot of ways. Oh, do they work hard? Do they not?

And I think the president wants to say, “Listen, we need you a part of our economy, we want you to contribute and do great things and accomplish your dreams here in America. And I’m here to ensure that you have the economic opportunities, the social opportunities, to be able to succeed in America.”

I remember back in the Obama years when we were talking about the kids moving in their parents’ basement and the president is saying get out of the basement, let’s get to work, we are creating all these jobs. We want to make sure that we’re able to match your skills with what is happening in our economy, and we’re also saying, “You know what, you may not go to college for four years. It’s not just one track.”

We’re talking about vocational education in general. We’re saying that every millennial matters. That whether you’re gonna go to college or not, that there’s opportunities and training for you that we want to make sure are available to you. And that’s why the president is ensuring that we’re investing in workforce development, which is one of his priorities. 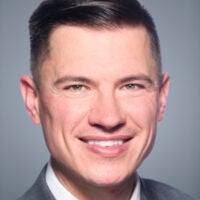