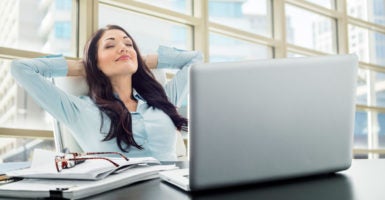 “Creative destruction.” When I first heard the term in school, I thought it must have been a mistake. How can creation destroy? And how can destruction be creative?

The phrase seemed so at odds with itself as to sound like a contradiction.

Thank God for teachers. Mine explained the term, and everything became clear. Creation can destroy, and destruction can be creative.

The laptop on which I write this is a great example. Personal computers do many marvelous things—and they also banished typewriters from existence. (When was the last time you even saw one?) Typewriters were the target of the computer’s destruction, and all of us are the beneficiaries of its creation.

Every time this happens—and, fortunately, it happens a lot—innovation results. New efficiencies are realized. And more and more people, here and around the world, see their standard of living improve.

And yet, not everyone gets it. Like the confused schoolgirl I once was, the government seems to have no idea that creative destruction is a good thing. Right now, government officials at all levels, domestic and international, are working on a plan to shackle the internet with an unprecedented tax burden.

Here in America, state governments have long sought to overturn constitutional limits that prevent them from exporting their sales tax regimes to even the smallest online retailers working beyond their borders.

The issue already has been heard by the Supreme Court twice, in 1967 and 1992. And each time, the court told tax-hungry state governments that their power to force retail­­­ers to abide by local sales tax laws stopped at their borders.

South Dakota is the latest to take up this unholy tax crusade and is doing so under the banner “The internet changes everything.” Its claim is that if a South Dakota resident buys something from an online retailer, that retailer essentially has a store in South Dakota and therefore should be taxed as if the store really was in South Dakota. Except it’s not.

Making matters even worse, South Dakota’s idea is to expose anyone daring to sell things to its residents via the internet with a harsh mix of tax filings, audits, and the potential for having to travel to South Dakota for a date in court with government prosecutors.

What is this really all about? Governments standing in the way of creative destruction. In the interest of collecting more tax revenue and protecting local brick-and-mortar businesses from competition, government officials want to saddle online businesses—large and small—with high tax and compliance costs.

If they succeed, prices will rise. Innovation will suffer. Efficiency will be lost. And the cost and quality of our lives will be directly impacted.

Right now, congressional leaders are debating whether to include an internet sales tax in this week’s omnibus spending bill. Fortunately, strong opposition exists to such language, but a final decision has not yet been made.

In addition, the Supreme Court is scheduled to hear oral arguments April 17 in a related case. Unfortunately, the solicitor general of the United States has lined up in support of the state tax power grab, arguing that a website should be treated for sales tax purposes like a full-fledged local business.

Both of these scenarios present a frightening proposition, especially for small entrepreneurs who lack the resources, accountants, and tax lawyers that would be needed to comply with 50 different state tax laws.

It’s even scarier when one realizes this will spread globally, causing every business seeking to sell via the internet to become compliant with hundreds of international taxes, too. Already, the tax collectors in the European Union are calling for a new corporate “digital tax” that initially would target America’s largest internet companies.

And once that starts, hard-earned money will be taken from innovators and handed over to governments, which will grow dramatically as a result.

The world is watching how America, the home of the internet, proceeds.

If we preserve protections in our Constitution against unbridled taxation, the “creative destruction” brought by internet commerce will continue. Consumers will have access to ever more products and services at ever-lower prices. Businesses will expand, creating more jobs and lifting more people out of poverty. And children will grow up in a world that’s open for innovation and eager to give them a platform for their creativity.

But if tax collectors prove more powerful than entrepreneurs, all bets are off. The internet is global in scale, and digital technology is increasingly a part of every business, from the biggest to the smallest. Once digital tools become a target for taxation, no firewall will stand. Delinking actual business presence from taxes will harm innovators and bulk up government bureaucracies.

No one is free from risk here. Because if the internet tax bell tolls, it will toll for us all.