When Did Broward Sheriff Scott Israel Know the Truth About His Cowardly Deputy? 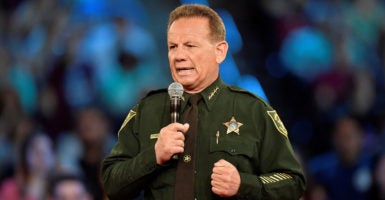 Across the United States, the latest revelations related to the Parkland high school massacre truly shock the conscience.

Broward County Sheriff Scott Israel dropped the bombshell that his deputy, whose job it was to defend the kids at Marjory Stoneman Douglas High School, chose instead to save himself as the murderous gunmen armed with an AR-15 rifle executed high school children and teachers in the adjacent building.

In the coming days, the truth and details will hopefully continue to emerge. But a critical question that must be answered immediately is this: For how long has Israel known that the school resource officer assigned to protect the children in Parkland chose to cower rather than carry out his sworn duty to protect the students?

During a news conference Feb. 22, Israel seemed to imply that he had just discovered what transpired by viewing video evidence revealing the inaction of his officer. “What I saw was the deputy arrive … take up a position, and he never went in,” said Israel. His announcement has made headlines across the United States.

There is a lot going on here that does not seem to add up. In recent days, Israel has repeatedly asserted that the protocol ever since the mass shooting at the high school in Columbine is to move decisively to confront active shooters. It’s a point that Israel has driven home in multiple press conferences and at a nationally televised CNN town hall meeting where he enjoyed rapturous applause from the crowd.

Instead, Israel finally admitted that his deputy remained outside for upward of four of the six minutes that the gunman used to roam the halls of the freshman building hunting and heartlessly slaughtering defenseless children.

Israel said he was “devastated, sick to my stomach, there are no words.” But why did it take more than one week for Israel to share this information?

Surely Israel and his officers began reviewing the surveillance footage the very day of the shooting. Plus, the officers who did bravely enter the school and helped save lives by evacuating the wounded must have seen or spoken with the school resource officer. So why did Israel decline to reveal the truth about what took place, instead repeatedly making the misleading assertion that the school resource officer was elsewhere on the campus, but not close to the scene of the shooting?

There must be an immediate and comprehensive investigation to examine who knew the facts and when. The families of the children murdered while their only hope for survival failed them deserve to know why the sheriff apparently opted to spout half-truths and decline to be forthcoming with the facts.

I hope that President Donald Trump, never one to pull a punch, will come forward to demand accountability and answers to these vital questions. The president has plenty of reasons to do so, especially since he has been played the fool. After all, Israel escorted Trump during his visit to the hospital to meet shooting victims, speaking proudly of the heroism of his men and parading around as a hero while he apparently harbored the dark secret that his officer charged to serve and protect did neither.

I cannot begin to imagine how this latest news will further devastate the family members of the victims who have already been struggling to deal with the unimaginable. This most recent news will undoubtedly pour salt into the raw wounds of family members and parents who lost their loved ones. They deserve better.

Israel should immediately provide a detailed timeline of what he knew and when. He must release the video so that we can see exactly what happened. After all, there is no reason to withhold it since the killer is in custody and the cat is now out of the bag.

Israel should also release all recordings of the 911 calls, as well as transcripts of the police radio transmissions.

Also, the officers from all law enforcement agencies who were there at the scene of the crime and saw firsthand what actually happened must step forward and be honest and open about what transpired without any fear of retribution.

America deserves the facts. The Parkland families and the survivors deserve the truth.