Here’s What Congress Is Doing to Tackle School Safety 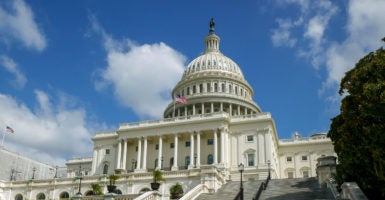 In the wake of the recent horrific shooting at Marjory Stoneman Douglas High School in Parkland, Florida, a number of proposals involving federal grant programs have been offered in Congress to try to address the critical issue of school safety.

Empowering states and localities to implement evidence-based programs that meet their needs represents a sensible approach.

Among the proposals under consideration is the Students, Teachers, and Officers Preventing (STOP) School Violence Act of 2018, which has been introduced in the House by Rep. John Rutherford, R-Fla., a former sheriff, and in the Senate by Sen. Orrin Hatch, R-Utah. Both House and Senate versions have several co-sponsors and appear to enjoy broad bipartisan support.

The House version would authorize $50 million annually to create a grant program, to be administered by the Department of Justice’s Bureau of Justice Assistance, to assist local law enforcement, school personnel, and students by defraying up to 75 percent of the costs associated with evidence-based programs to prevent school shootings.

Such programs could include training and technical assistance for students, school personnel, and law enforcement to identify signs of violence and intervene early to prevent students from hurting themselves and others; the development and operation of anonymous reporting systems for threats of school violence; the development, operation, and training of school threat assessment intervention teams; coordination between school officials and local law enforcement; and any other measure that the director of the Bureau of Justice Assistance determines might significantly improve school security.

The Senate bill would authorize $75 million in fiscal year 2018 and $100 million annually for the ensuing 10 years, although the bill provides that such sums might be partially offset by funds previously allocated to a Justice Department research program called the Comprehensive School Safety Initiative.

Similarly to the House bill, the Senate version would authorize the Justice Department to issue grants to fund evidence-based training for local law enforcement officers, school personnel, and students to prevent student violence by enabling them to recognize and respond quickly to warning signs of school violence; technology and equipment to improve school security infrastructure, such as locks on classroom doors and reinforced entryways; the development and operation of anonymous reporting systems; the development and operation of evidence-based school threat assessment and crisis intervention teams; and programs to facilitate coordination with local law enforcement officials, including those officers who already staff schools.

Alexander’s proposal would expand the authority states have under Titles II and IV of the Every Student Succeeds Act—formerly known as No Child Left Behind—enabling them to put existing funding toward efforts to strengthen school safety.

Title II of the Every Student Succeeds Act authorizes federal programs largely geared toward teacher professional development and class size reduction, and historically, state and local education agencies have put the majority of their Title II funds toward those purposes.

States would also be given more flexibility under Title IV, which currently authorizes the Student Support and Academic Enrichment Grant program, which is designed to bolster technology and student health efforts, among other purposes.

In an address to the Council of Chief State School Officers, Alexander suggested that states could use the money currently allocated under Titles II and IV to address “mental health, hiring more school counselors and steps for violence prevention.” He also said the proposal would allow states to use the funding for “armed systems, improving entrances and exits of schools, installing security cameras, and other infrastructure upgrades if you chose to do that,” Politico reported.

Empowering states with more control over the dollars that are currently spent through federal programs is one way policymakers can provide the tools states and local leaders need to address school safety issues.

Such efforts are consistent with the broader policy goal of restoring state and local control in education—including school safety—and empowering on-the-ground stakeholders to design solutions that fit the needs of their communities.