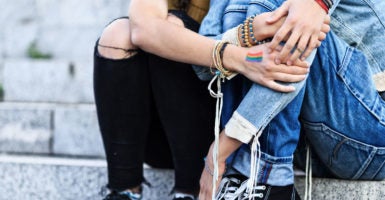 “People who are suffering are not receiving the care they deserve,” Heritage Foundation scholar Ryan T. Anderson says in introducing his book, “When Harry Became Sally: Responding to the Transgender Moment.” (Photo: Valentinrussanov/Getty Images)

Transgender ideology is doing irreparable damage to children’s mental and physical well-being and the consequences may be irreversible, a Heritage Foundation scholar warns.

“People who are suffering are not receiving the care they deserve,” Ryan T. Anderson, a senior research fellow at the leading Washington think tank said Wednesday in remarks there introducing his new book, “When Harry Became Sally: Responding to the Transgender Moment.”

Anderson said transgender activists endanger children and young adults with their goals and “giant experiment” while seeking to marginalize as hateful those who oppose their agenda.

“Biology is not bigotry,” he said, in remarks available in full on video (beginning at 11:20).

About 40 percent try to kill themselves, and the rate stays about the same before and after they go through medical procedures to “transition” to their preferred gender. Those who have transition surgery are 19 times more likely than average to die from suicide, he said.

Between 80 percent and 95 percent of children naturally outgrow their gender dysphoria if they allow natural development to occur and they begin to feel comfortable with their biological gender, Anderson said, citing the available scientific evidence.

But the transgender movement’s rhetoric is being taught as fact in public schools, where it is embodied with a purple “Gender Unicorn.”

Previously, “Genderbread Person,” a parody of the Gingerbread Man, was the movement’s mascot. It was discontinued for looking too much like a man, Anderson related, which proponents of transgenderism say perpetuates the outdated ideas of “patriarchy” and “biological sex.”

“Appropriately enough,” Anderson said, “they use a unicorn. A mythical creature.”

Society is “conducting a giant experiment on our children” by medicating children with puberty-suppressing hormones that may lead to a decision to get sex-reassignment surgery, he said.

Such drugs stall puberty for a year or more and, in some cases, altogether. Worse yet, Anderson said, the process is irreversible.

In one case, he said, therapists were able to figure out what made a boy think he was a girl and got him the care he needed.

As Anderson told it, the boy had been bullied by other boys at school, so he gravitated to becoming friends with girls. He picked up girls’ habits and rejected his biological gender.

The boy’s therapist figured out that the boy thought all boys had to be a “macho man,” an alpha male, but the therapist showed him that men can be caring and sensitive, too, by taking the boy out of the toxic environment and talking to him.

Eventually, Anderson said, the boy identified with his biological sex, and those who cared for him prevented what could have been serious damage to his organs and years of medication that would have stopped his body from fully growing.

This report has been modified to summarize more accurately the speaker’s remarks,  available in their entirety in the video above.