In Wake of Florida School Shooting, Trump Calls for Culture That ‘Embraces the Dignity of Life’ 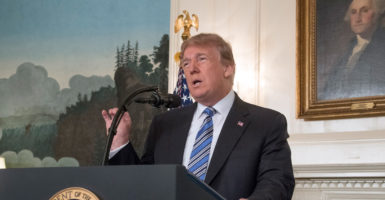 "You have people who care about you, who love you and who will do anything at all to protect you," President Donald Trump tells the nation's children Thursday during remarks on the deadly shooting at a high school in Parkland, Florida. (Photo: Ron Sachs/CNP/Polaris/Newscom)

President Donald Trump, saying he will travel to Parkland, Florida, following a deadly school shooting there, vowed Thursday to meet with leaders across the country to address school safety and mental health issues.

“Each person who was stolen from us yesterday had a full life ahead of them,” @RealDonaldTrump says.

“Our entire nation with one heavy heart is praying for the victims and their families,” Trump said from the Diplomatic Room of the White House.

At another point, the president called for an American culture that once again “embraces the dignity of life.”

Police said a former student shot and killed 17 persons Wednesday using an AR-15-style rifle at Marjory Stoneman Douglas High School, injuring or wounding at least 14 others in the rampage. Parkland is in Broward County, near Fort Lauderdale.

The suspect, identified as 19-year-old Nikolas Cruz, is in custody and charged with 17 counts of premeditated murder. Cruz had been expelled from the high school for disciplinary reasons.

Trump didn’t mention a date for visiting Parkland, which he called a “great and safe community,” saying only that he is “making plans” to go. He said:

Each person who was stolen from us yesterday had a full life ahead of them, a life filled with wondrous beauty and unlimited potential and promise. Each one had dreams to pursue, love to give, and talents to share with the world. Each one had a family to whom they meant everything in the world.

Trump quoted a Bible passage from 2 Kings during his remarks.

“In these moments of heartache and darkness, we hold onto God’s word in Scripture: ‘I have heard your prayer and seen your tears. I will heal you,’” the president said. “We trust in that promise.”

Trump spoke Wednesday to state and local authorities in Florida, and said he would meet later this month with the nation’s governors and attorneys general about better solutions to secure schools and address mental health issues.

Although Trump didn’t note a date for that meeting, the National Governors Association will hold its annual winter meeting in Washington from Feb. 23-26. A group of governors typically meets with the president during the gathering.

Trump addressed the nation’s children who must cope with the shooting, asserting:

I want to speak now directly to America’s children, especially those who feel lost, alone, confused, or even scared. I want you to know that you are never alone and you never will be. You have people who care about you, who love you, and who will do anything at all to protect you.

If you need help, turn to a teacher, a family member, a local police officer, or a faith leader. Answer hate with love. Answer cruelty with kindness.

We must also work together to create a culture in our country that embraces the dignity of life, that creates deep and meaningful human connections, and turns classmates and colleagues into friends and neighbors.