This Chinese Company’s Intellectual Property Theft Is No Isolated Incident 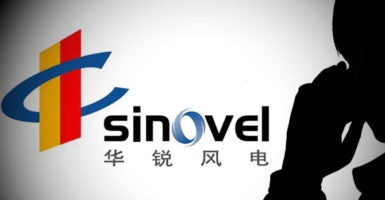 David Beleson is a member of the Young Leaders Program at The Heritage Foundation.

Intellectual property theft has been a thorn in the side of U.S. companies for decades. China has long been a chief offender here, and continues to be in 2018.

Sinovel had been charged on June 27, 2013, for stealing proprietary wind technology from AMSC to produce its own turbines powered by AMSC’s technology. The Wall Street Journal estimates that the theft cost AMSC more than $800 million and that according to federal officials, Sinovel could be fined a multiple of that loss, up to $4.8 billion.

The theft by a Chinese company is unsurprising. What surprises is that the U.S. lacks of a regular enforcement mechanism for theft prevention and property protection.

Over the last 10 years, Chinese nationals have stolen proprietary information and/or trade secrets from Boeing, Northrop Grumman, DuPont Pioneer and Monsanto. For decades, the Chinese government has used intellectual property theft as one means of catching up to the United States.

The Sinovel case will certainly not be the last case of intellectual property theft for China. It highlights the United States’ need for a viable means of protecting U.S. property and of dissuading theft.

Pressure to maintain strong economic growth within China has created an environment where success may be attained by any means necessary—and the theft of American intellectual property has been made fair game. Unfortunately, intellectual property theft equates to a loss of nearly $600 billion for the United States each year.

China has the world’s second-largest economy and is a rising competitor seeking legitimacy. That said, it has fueled its rise largely through illegitimate practices, and the United States needs to shed more light on these malfeasances.

If China wants to be seen as a legitimate actor, then it must act as one.

The United States can take three specific actions to ensure better Chinese behavior and send a message that the U.S. will no longer tolerate the theft of American intellectual property:

A collapse in trade between the U.S. and China would be highly detrimental given the economic interdependence between the two countries. Such a collapse would have wide-ranging negative impacts for the American economy.

The United States should not merely assume that all Chinese entities have malicious intentions. That said, looking ahead, the United States needs to do a better job of protecting American property. We can do so by tracking malicious entities, sanctioning them, and shedding light on their actions in a public and international forum.

Perhaps then, will China receive the message that theft is not the way to get to the top.