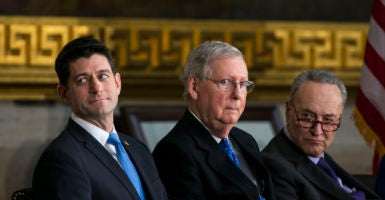 Conservative lawmakers warned that Congress was on track to pass a last-minute budget deal, pushed by Republican and Democrat leaders, that will raise caps on spending by $300 billion over two years.

Update: The Senate approved the deal by a vote of 71-28  about 1:30 a.m. Friday, followed by the House, which passed it 240-186 around 5:30 a.m. President Donald Trump signed the budget bill within three hours, ending a brief government shutdown overnight.

The deal is the “second-largest spending increase in a decade, second only to the Obama stimulus, which we all know was the biggest boondoggle that you can imagine,” Rep. Jim Jordan, R-Ohio, told The Daily Signal in an interview before the votes in the Senate and House.

In the end, 67 House Republicans voted no, as did 119 Democrats. Many of the Democrats had demanded amnesty for illegal immigrants.

After signing the budget bill, Trump took to Twitter to explain why Republicans were “forced” by Democrats to get behind more nondefense spending:

Just signed Bill. Our Military will now be stronger than ever before. We love and need our Military and gave them everything — and more. First time this has happened in a long time. Also means JOBS, JOBS, JOBS!

Without more Republicans in Congress, we were forced to increase spending on things we do not like or want in order to finally, after many years of depletion, take care of our Military. Sadly, we needed some Dem votes for passage. Must elect more Republicans in 2018 Election!

The new deal is “approaching a quarter of a trillion dollars in discretionary spending increase in one year,” Jordan said, “and we are going to run almost a trillion-dollar deficit, so this is just not what the American people elected us to do.”

Government funding was set to run out at midnight Thursday if Congress did not act.

The two-year deal would provide roughly $160 billion to the Pentagon, allocate $128 billion to nondefense programs, and devote $80 billion to disaster relief.

The deal, according to a recent commentary by Justin Bogie, a senior policy analyst in fiscal affairs at The Heritage Foundation, would raise spending caps set in the Budget Control Act by $296 billion, “with only a third of that being paid for.”

The Budget Control Act, passed in 2011, sought to curb government spending and control the growth of federal programs.

Today I urged my colleagues to let this budget go forward, through both chambers & onto the President’s desk, where President Trump seems ready to sign it. It will help America in so many ways. pic.twitter.com/mqO6mXBkQ8

Official position: HFC opposes the caps deal. We support funding our troops, but growing the size of government by 13 percent is not what the voters sent us here to do.

But Rep. Andy Biggs, R-Ariz., tweeted that he is “disgusted” by the deal. Biggs told The Daily Signal in a phone interview that he couldn’t support the plan.

I am disgusted by our unconditional surrender on the budget caps deal & I will be voting against it. We must remember that the Roman Empire and the Soviet Union fell, in large part, due to a gross internal failure to control spending. The U.S. can't keep on this trajectory. #AZ05 pic.twitter.com/jZVhhNOvKC

“I am going to be voting no,” Biggs said. “The deficit is going to increase significantly within the next few years because we haven’t done a balanced budget, we’ve just done CRs [continuing resolutions]. So this contributes to all of that.”

The conservative House Freedom Caucus, a group of 30-some Republicans, including Biggs and Jordan, said it does not support the deal.

Official position: HFC opposes the caps deal. We support funding our troops, but growing the size of government by 13 percent is not what the voters sent us here to do.

Rep. Dave Brat, R-Va., also a member of the Freedom Caucus, said he too would vote no.

“I am going to vote no because once again, the House did its work on time with 12 appropriations bills, sent them over to the Senate, the Senate failed, and now we’re going to do Democrat policy instead of Republican policy by increasing the budget $300 billion, right?” Brat told The Daily Signal, adding:

We failed on health care, on immigration, the Senate keeps waving shiny objects over there, and now we are having a budget fail, a 13 percent increase in the budget. When we are supposed to be reducing the deficits, we are going to have trillion-dollar deficits as far as the eye can see.

Rep. Andy Harris, R-Md., another Freedom Caucus member, said the deal does not do enough to advance conservative priorities.

“The bottom line is that this adds hundreds of billions of dollars to our federal [budget] deficit and ultimately our federal debt,” Harris told The Daily Signal in an interview. “It’s going to create new spending programs that are going to have to be funded every year, and it does it without paying for it or setting priorities.”

Sen. Rand Paul, R-Ky., tried to block the vote in the Senate.

“All Senator Rand Paul is asking for is a 15-minute vote on his amendment to restore the budget caps,” Paul spokesman Sergio Gor said in a tweet. “He is ready to proceed at any time.”

I'm voting against this $300 billion spending hike. Fiscal responsibility is more than a talking point to trot out when the other guys are in charge. Let’s be conservative no matter who’s in charge, no matter who’s in the White House, or who controls each chamber of Congress pic.twitter.com/zYEDgMX5Ap

Ken McIntyre contributed to this report, which was updated to include the Senate and House votes and Trump’s signing of the budget bill.