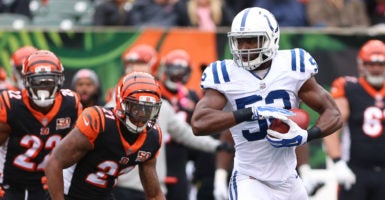 The man suspected of killing Indianapolis Colts linebacker Edwin Jackson and Uber driver Jeffrey Monroe in a roadside crash is an illegal immigrant who has been deported two times in the past, Indiana State Police said Monday.

The driver is 37-year-old Guatemalan national Manuel Orrego-Savala. He gave police the alias Alex Cabrera Gonsales after being arrested for slamming into Jackson and Monroe as they stood on the shoulder of Interstate 70 early Sunday morning.

“Orrego-Savala is in the United States illegally and has previously been deported on two occasions, in 2007 and again in 2009,” Sgt. John Perrine said in a statement, according to the Indianapolis Star. “State police investigators are working with U.S. Federal Immigration Officials and they have placed a hold on Orrego-Savala.”

Jackson, 26, and Monroe, 54, were standing near a stopped vehicle when Orrego-Savala drove his Ford F-150 pickup onto the emergency shoulder and struck both men, according to police reports. Investigators believe Monroe had pulled over and exited the car to assist Jackson, who had become ill.

Orrego-Savala tried to run away from the scene, but was apprehended on a nearby exit ramp, police said. He remains in custody in the Marion County Jail on charges of drunk driving, causing a death while driving intoxicated, and driving without a license.