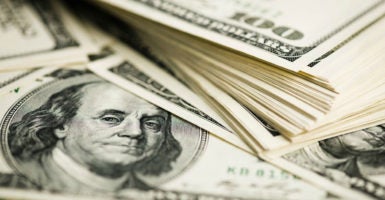 Earmarks could be making a comeback.

Before a Republican-led Congress banned earmarks back in 2011, lawmakers used earmarks to send funds directly to specific projects and recipients in their districts. This was more widely known as “pork-barrel spending.”

While in theory there is nothing wrong with Congress being actively involved in specific funding decisions, lawmakers exploited this practice, leading to corruption and wasteful spending. Unfortunately, earmarks have become a tool that Congress can’t be trusted with.

President Donald Trump recently expressed his support for bringing back earmarks, and some members of Congress are considering getting back on board as well.

It’s been only six years since Congress enacted the ban, and many who are voicing support for an earmark comeback seem to have forgotten why banning it was so necessary in the first place.

Here are seven things to remember about earmarks:

The infamous “Bridge to Nowhere” is still the perfect example of earmark waste at its worst.

Back in 2005, Rep. Don Young, R-Alaska, succeeded at directing a whopping $223 million of taxpayer funds to the construction of a bridge between a small Alaskan town and an even smaller island that housed a local airport.

Alaskans themselves called for the removal of the earmark, recognizing that the hefty funding could be put to better use somewhere else.

That same year, Hurricane Katrina left the southern seaboard in shambles and many Americans felt that in a time of such apparent need, tax dollars shouldn’t have been spent so frivolously.

But strong national outrage wasn’t enough to stop the funding, and the project continued wasting money until 2007 when then-Gov. Sarah Palin put the brakes on the costly project, when costs had reached almost $400 million. The project became the poster child for earmark waste and was officially abandoned in 2015.

2. Earmarks grow out of control.

The use of earmarks caused a snowball effect. Once legislators were given free rein to direct funds wherever they deemed fit, they took advantage.

For example, President Ronald Reagan decided to veto a transportation bill in 1987 because it included too many earmarks. The earmark count was 152 total. In 2005, President W. Bush signed a road bill that contained 6,371 earmarks.

As Sen. Tom Coburn, R-Okla., so aptly stated, “Earmarks are the gateway drug to spending addiction.”

Instead of throwing earmarked money at their districts, lawmakers should focus on conducting agency and department oversight to ensure that federal funding meets the needs of their constituents.

Back in 2004, Marlowe & Co. owner Howard Marlowe boasted that he had received at least 172 government earmarks for his professional clients. As a for-profit company, Marlowe had no right to be receiving such specialized treatment from the government.

But this is hardly the only instance. Jack Abramoff, a former Washington lobbyist turned convict, was found guilty of bribing lawmakers and White House officials for specific earmarks and other favors for his clientele in the casino and gambling business. This occurred just one year after former Rep. Duke Cunningham, R-Calif., was sentenced to over eight years in prison for accepting bribes and extravagant gifts from lobbyists in exchange for funding through appropriation earmarks and his vote on certain pieces of legislation.

These notorious lobbying scandals should be reason enough to leave earmarks in the past without a look back.

Over the years, there have been numerous instances of congressmen and senators inserting earmarks into bills to fund certain projects that benefited themselves, family, or business affiliates.

Rep. Bennie Thompson, D-Miss., came under scrutiny when some of the funding that he secured through a $900,000 earmark for road construction in his district was used to repave the road where he and his daughter both owned homes.

Even former Speaker of the House Dennis Hastert, R-Ill., was involved in a national scandal when it was revealed that he inserted an earmark of $207 million to create a highway near his own personal property.

Reinstating the use of earmarks will undoubtedly result in more conflicts of interest like these.

5. Earmarks undermine the practice of funding projects based on merit.

When legislators use earmarks to declare that a certain company should get the bid to work on a federal project, it strips away the ability for other companies to compete.

In order to reward specific (and influential) businesses, Congress sacrifices both the cost and quality of work. When companies are able to fairly bid on a project, costs will inevitably be lower and the company that can produce the best quality at the lowest cost should prevail.

Sadly, it is the public—and sometimes the nation’s security—that loses with earmarks, because the absence of competitive bidding for projects leads to lower-quality results and higher costs. If the costs had been lowered through competition, the funds that were saved could have gone toward other projects.

By undermining merit-based and other competitive funding processes, earmarks contribute to the misallocation of resources and lead to government waste.

When the Clinton administration signed the transportation bill known as TEA 21 into law, it included 1,850 earmarks that chipped away at state and local authority. Those earmarks were used to direct transportation funding to specific projects across the country.

Florida challenged the earmarks, arguing that the allocated funding did not address the state’s actual transportation needs. But the Department of Transportation overruled those objections and gave priority to the federal earmarks.

States and local governments generally know better than Washington how to best meet the needs of their residents. Earmarks undermine state decision-making over funds that are allocated through formula-based grants.

Having the power of the purse means Congress has the jurisdiction to appropriate government funds, but also the responsibility to oversee how those funds are being used.

Each year, the same federal agencies end up on the Government Accountability Office’s high-risk list as lawmakers neglect reforms. In addition, lawmakers have continued to allow unauthorized appropriations to get out of hand.

The Congressional Budget Office estimated that in 2016 alone, the U.S. government spent $310 billion on services and programs that are no longer or have never been authorized to receive funding.

Congress should follow regular order and reauthorize funding for programs and agencies that are within the proper scope of federal activities, and stop funding those programs that are wasteful, duplicative, or best handled in the private sector or by state and local governments.

Bringing earmarks back into the mix will only distract legislators from making these necessary reforms and give them more room to inappropriately allocate federal funds.

Congress has attempted to rename earmarks as “congressionally directed spending” in hopes that the public will forget the damage they once caused on both the federal and local levels.

No matter what legislators call this harmful practice, reviving earmarks is a dangerous proposition and certainly not the answer to our broken budget process. Congress should pursue real budget reform, not return to the failed ways of the past.