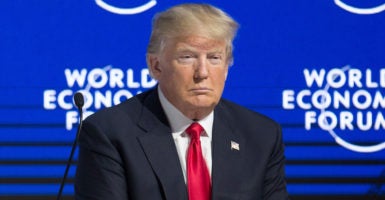 The Trump administration must take action to rid the country of the identitarian fever currently sweeping into all corners of society. (Photo: Chine Nouvelle/SIPA/Newscom)

Americans who are sick of identity politics and yearn for a return to the unifying notion of “e pluribus unum” will cheer the Census Bureau’s recent move to reject changes to the decennial survey that were proposed by the Obama administration.

Briefly put, the Obama administration had proposed artificially creating yet another pan-ethnic grouping, for Americans of Middle East and North African descent. The administration also proposed reducing the choices of Americans of Latin American or Caribbean descent (the bureaucratically invented pan-ethnic group the census calls “Hispanics”) to identify themselves by a real race (such as black or white).

The Obama administration made this proposal in late September 2016, no doubt fully expecting an incoming Clinton administration to rubber-stamp it (pasted below is the balkanizing census question that was proposed). Then history got in the way.

The decision, announced last Friday by the bureau, to stop this further slide into becoming a fractured republic is welcome, if only because not doing a very bad thing is itself a very good thing.

But now the Trump administration needs to go much further to rid the country of the identitarian fever currently sweeping into all corners of society.

It must start with the decisive step of getting rid of many of the silly ethnic boxes that since 1980 have found their way into the constitutionally mandated census. It must also break once and for all the lock that progressive organizations currently enjoy, through advisory bodies, on the formulation of the census.

These steps will no doubt require political courage, but the administration prides itself both in its boldness and on understanding the centrality of the nation’s identity.

The breakup of the country into government-created ethnic categories has been a negative byproduct of the civil rights era, and the opposite of the equality the 1964 Civil Rights Act itself set out to create. As one of the foremost historians of the period, University of California, San Diego professor John Skrentny, put in his book “The Minority Rights Revolution,” policymakers and bureaucrats:

carved out and gave official sanction to a new category of Americans: the minorities. Without much thought given to what they were doing, they created and legitimized for civil society a new discourse of race, group differences and rights. This new discourse mirrored racist talk by reinforcing the racial differences of certain ethnic groups.

Our current racial and ethnic dispensation is more akin to apartheid-era South Africa than to anything the Founders intended, but it is strictly policed by special-interest ethnic organizations.

The outsized sway of these organizations is increasingly the subject of academic attention. As Alice Robbin of Indiana University describes it, “They can be influential beyond their numbers in the public policy process” and have now made America into an “interest group society.”

This actually understates the problem: there can be compromises, say, between labor and capital, but there cannot be compromises where identity, not money, is at stake (just witness the contradictory mess that is “intersectionality”).

The administration has shown it understands how liberal groups have insinuated themselves into policymaking over the past decades in other areas and has moved to limit their influence. The census deserves at least the same attention.

The census “both creates the image and provides a mirror of that image for a nation’s self-reflection” is how Harvard professors Jennifer L. Hochschild and Brenna M. Powell put it.

Does President Donald Trump want to leave office knowing it has left progressive outfits such La Raza, NALEO, Asian Americans Advancing Justice, the Census Project, the Arab American Institute, the Leadership Conference on Civil and Human Rights, and many others in charge of determining who America is?

The success of these special-interest organizations depends on brainwashing individual Americans into sorting themselves out by ethnic and racial categories, and seeing themselves as members of victimized and alienated minorities who need government protection from a supposedly cruel and irredeemably racist society. Even with the best of intentions, the incentives are all wrong.

The Census Bureau itself tells you that “The information the census collects helps determine how more than $400 billion of federal funding each year are spent on infrastructure, programs, and services.”

In other words: “come and get it.”

These groups are now so used to mau mauing census officials that when the Census Bureau made its announcement last Friday they complained almost in unison, and promised to take their case to the U.S. Congress.

But the interest of any administration, right or left, should be to encourage Americans to see themselves as empowered citizens with agency and the ability to thrive in a country that, despite its faults, provides opportunities for those willing to take advantage of them. The goal for all Americans, especially for the left, should be social solidarity, a concept this president has emphasized, but that many in the left are now also understanding.

This is why all Americans, liberal or conservative, should welcome the census news, and ask for further steps.