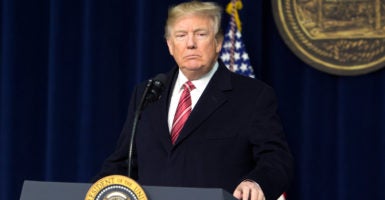 “Of course, they had other problems, but maybe all of you should start thinking about going back to a form of earmarks," President Donald Trump tells House and Senate members. (Photo: Chris Kleponis/dpa/picture-alliance/Newscom)

Some conservatives are sounding the alarm over reinstating earmarks in Congress, as President Donald Trump voiced support Tuesday for reviving a budgetary practice that critics say feeds cronyism and corruption in government.

“I hear so much about earmarks and how there was a great friendliness [among lawmakers] when you had earmarks,” Trump said Tuesday in a bipartisan meeting on immigration with House and Senate members.

“Of course, they had other problems, but maybe all of you should start thinking about going back to a form of earmarks,” the president said.

In a statement provided Wednesday afternoon to The Daily Signal, Culberson said earmarks could help his district recover from Hurricane Harvey, which devastated Houston, among other areas, with flooding.

“Hurricane Harvey changed everything for my district, and it’s my job as a representative to be an advocate for my constituents,” Culberson said.

Conservatives long have opposed earmarks, which direct taxpayer money to lawmakers’ special interests and projects through the budget without competition based on merit. Lawmakers banned earmarks under House rules in 2010.

Rep. Mark Walker, R-N.C., chairman of the Republican Study Committee, the House’s largest GOP caucus, told The Daily Signal in a phone interview that bringing back earmarks isn’t an option for him.

I think it’s a very slippery slope to bring back something that has been abused by so many, so much of the time. … Members [have] to grovel to work out bills and be influenced to vote for legislation they may or may not have even supported at some point. So I think it’s a legitimate concern; I worry that earmarks would allow the algae-infested waters to start filling up the swamp.

Rep. Scott DesJarlais, R-Tenn., a member of the House Freedom Caucus, told The Hill about bringing back earmarks: “I don’t know that I’m opposed to it.”

“Since Congress holds the power of the purse, members of Congress should be able to direct the Army Corps of Engineers to move more rapidly on a flood control project,” Culberson told The Daily Signal.

The Texas Republican, whose district includes parts of Houston, said earmarks would be a way to help his district recover:

I’m proposing that we restore the ability of members of Congress to direct money toward flood control or highway projects when we receive a request from a local or state unit of government. We would submit the request at the subcommittee level, and the request would then go through the entire legislative process, out in the open, so that the public can see it and debate it. Most importantly, these projects would not increase spending. It’s good public policy.

A reporter for The Washington Post tweeted that Marc Short, Trump’s director of legislative affairs, is not as keen as the president on reinstating earmarks:

"It's so good to hear you say it that way," Short tells @wolfblitzer after Wolf explains how corrupting earmarks were last decade.
So, no, despite Trump comments, the White House is not backing earmarks.

The White House did not respond to The Daily Signal’s request for comment.

One conservative House staffer told The Daily Signal in an email Wednesday that reinstating earmarks would go against Trump’s pledge to drain the swamp.

“If you’re going to drain the swamp, reinstating earmarks is the last thing you should do. Congress banned earmarks because members were wasting taxpayer dollars and illegally enriching themselves,” the aide said. “Restarting that practice is not what everyday Americans sent us here to do.”

Other conservatives with influence on Capitol Hill are not happy with the development, either.

“I think [Trump] is getting bad advice on this and basically I think he has been frustrated that Congress hasn’t passed much of his agenda other than tax reform, and somehow believes that if they were able to reinstate earmarks, the rest of his agenda would get passed,” Wesley Denton, senior communications director at the Conservative Partnership Institute, told The Daily Signal in an interview.

“The truth is, what it would simply bring back is corruption and bribes and more big spending bills,” Denton said.

In a statement emailed to The Daily Signal, David McIntosh, president of the free-market group Club for Growth, decried the talk of reviving earmarks.

“If Republicans bring back earmarks, then it virtually guarantees that they will lose the House,” McIntosh said. “Bringing back earmarks is the antithesis of draining the swamp.  Earmarks will only benefit the special interests that grow government at the expense of working men and women.”

Mike Needham, chief executive officer of Heritage Action for America, the lobbying affiliate of The Heritage Foundation, said in a statement provided to The Daily Signal that resurrecting earmarks should not be an option.

“It is nearly unthinkable that after President Trump ran a historically successful election to ‘drain the swamp’ in Washington, D.C., Congress would consider reinstating one of the most egregious examples of cronyism on Capitol Hill,” Needham said, adding:

President Trump should continue to work with conservatives in Congress to drain the swamp and stop any congressional efforts to reinstate earmarks. Heritage Action is dedicated to working alongside President Trump to end cronyism and pass real conservative solutions that actually help hardworking Americans.

The House Rules Committee will hold a hearing  for members on reinstating earmarks on Jan. 18, and another hearing Jan. 19 with outside organizations, Politico reported.

This article has been modified to identify Walker correctly as chairman of the Republican Study Committee.