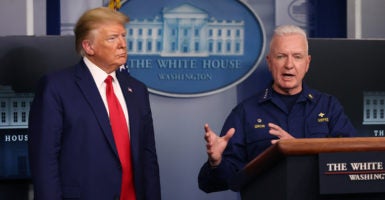 Hospitals have lacked testing for the coronavirus, and were running low on supplies such as face masks, food, and toilet paper, according to a government audit issued Monday.

The report by Department of Health and Human Services Assistant Inspector General Ann Maxwell surveyed 323 hospital staffs across the United States during the week of March 23-27.

“Hospitals reported that their most significant challenges centered on testing and caring for patients with COVID-19 and keeping staff safe,” the report says. “Hospitals said that severe shortages of testing supplies and extended waits for test results limited hospitals’ ability to monitor the health of patients and staff. They also reported that widespread shortages of personal protective equipment (PPE) put staff and patients at risk. In addition, hospitals said that they were not always able to maintain adequate staffing levels or to offer staff adequate support.”

During the White House briefing Monday, President Donald Trump repeatedly scolded reporters who asked about the report—and wanted to know who appointed her to assistant inspector general.

“The results are now coming in very quickly. Initially the testing were old and obsolete,” Trump said. “We have a brand new testing system that we developed very quickly.”

Adm. Brett P. Giroir, a medical doctor and the HHS assistant secretary for health, noted the report covered one week, and matters have changed since then.

“That inspector general report was done 23rd and 24th, during our ramp-up period, quite a long time ago,” the admiral said during the briefing. “It’s hard to interpret the report because it mixes up all kinds of things. But clearly there were complaints of a backlog from hospitals that send out tests.”

He said if the inspector general knew this, he wished the department had the information.

“I’ll tell you one thing I have a problem with, if there was such a problem that she knew about or he knew about on March 23 and 24, why did I find out about the test from them on the news media at 8 a.m. this morning?” the admiral said. “If there is a problem, I think you are ethically obligated to tell me where that is so we can interact with it like I do every single day. That’s a discussion for the future. Testing is at a really good position right now.”

ABC News reporter Jon Karl asked Trump a question, and he said Maxwell was named to her current post in January. After the admiral spoke, Trump asked Karl how long Maxwell had served in government. Karl said the deputy inspector general had worked in the Obama administration.

Trump said, “You didn’t tell me that. She did serve in the previous administration. You mean the Obama administration. Thank you for telling me that. See, that is a typical fake news deal … You are a third-rate reporter and what you just said is a disgrace. … You will never make it.”

Another reporter noted Maxwell has served in the government since 1999.