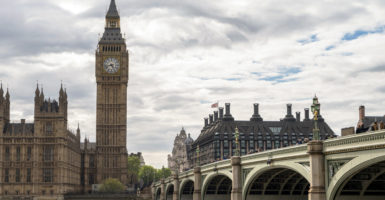 A British member of Parliament for the European Union said that once Brexit takes place, the United States and the United Kingdom can form a new free trade agreement based on markets.

Daniel Hannan is a member of the U.K.’s Conservative Party and is a member of the European Parliament. He is also president of the Institute for Free Trade, an organization that supports Brexit as a way to help promote free trade. He spoke Nov. 7 on the issue of Brexit and free trade at The Heritage Foundation.

Hannan said he wants to see a free trade deal between the U.S. and U.K. similar to what Australia and New Zealand has where each country accepts the other’s regulations. As an example, he said if one country approved a drug, then it should be sold in the other country too.

“If the alliance between our two nations is about anything, surely it is about raising the individual above the collective,” Hannan said.

Hannan said that back in 2001, Washington, D.C., wasn’t too kind to the thought of Brexit, and The Heritage Foundation was the only place he could get a “sympathetic hearing.”

He told a story about how discoveries took place when civilizations first started to rise, and some people found it easier to steal the crops of others. He said society then regularized the theft of crops with tolls and taxes, which then created tyranny.

Hannan said people eventually learned they were individuals and could trade with one another, which brought prosperity. After this, people could pursue trades that interested them.

“The argument for freedom and free markets is not simply that it has been a terrific instrument of poverty alleviation of social justice, but that it is about human dignity and personal autonomy,” he said.

Hannan said the case for free trade is the same as private property, and the government shouldn’t tell people what they can buy or sell. He said Great Britain got rich in the 19th century because it “reduced barriers to trade.”

He gave an example of price regulation by mentioning how the price of sugar in the U.S. is about twice the price of sugar worldwide and has been since the Revolutionary War. He said this causes candy makers to move to other countries, such as Canada and Mexico.

Hannan said Florida is an electorally important state, so people listen more to those who run the sugarcane market there. He added to this topic that distortions of trade hurt the economy.

“We have to make the argument that the best way of maximizing prosperity of this, as of any other nation, is to leave people free, to let them make their decisions, to allow capital to optimize,” Hannan said.

As for the U.K., Hannan said unemployment has fallen, and the stock market has gone up since the Brexit vote. He said the people who say Brexit will eventually hurt the U.K.’s economy are like “apocalyptic doomsday cultists.”