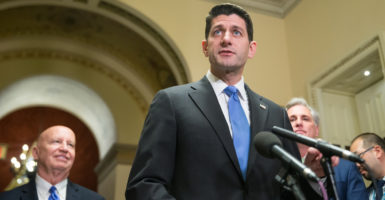 Following the House’s 227-203 Tuesday vote to pass Republicans’ tax reform overhaul, the legislation will move to a vote in the Senate, expected Tuesday night or Wednesday morning.

“Today is a momentous day for America,” Rep. Mark Meadows, R-N.C., chairman of the House Freedom Caucus, said in a statement. “The forgotten men and women of our country voted to elect President [Donald] Trump and a Republican Congress to fix our broken tax code that taxes Americans too highly, ships their jobs overseas, and directly undermines the fundamental principles that make America great. Passage of this bill is a monumental step toward doing just that.”

However, since three elements in the House bill violate the Senate’s Byrd rule, according to Business Insider, the House will vote again on a slightly revised tax reform bill Wednesday. The Byrd rule applies to legislation passed through reconciliation, which allows bills to pass the Senate with 51 votes.

House Speaker Paul Ryan said the bill was “one of the most important pieces of legislation that Congress has passed in decades to help the American workers and to help grow the American economy.”

The American people placed their trust in us to do this work for them. Today, we are making good that promise. pic.twitter.com/npTKhXPAZO

Twelve Republicans voted against the bill, which went to conference following the initial House votes Nov. 16 and Senate vote Dec. 2. No Democrats voted for the GOP tax plan.

Here's the list of all the Republicans who voted "no" on the House tax bill:

The bill also increases the current $1,000 child tax credit to $2,000 and gives a $500 credit for non-minor child dependents, which was reportedly included to secure the vote of Sen. Marco Rubio, R-Fla.

Following the House’s vote, Trump, who has said he wants to sign a bill by Christmas and made passing tax reform a major goal of his first year in office, congratulated Republican leadership.

According to a Dec. 18 report from the Tax Foundation, the organization estimates that Republicans’ tax plan “would significantly lower marginal tax rates and the cost of capital, which would lead to a 1.7 percent increase in [gross domestic product] over the long term, 1.5 percent higher wages, and an additional 339,000 full-time equivalent jobs.”

The Tax Foundation also estimates that the GOP tax plan would bring $1 trillion in federal revenues from economic growth.

Ahead of the House’s vote Tuesday, Sen. David Perdue, R-Ga., said the Republican tax reform bill will be a boon for middle-class families.

Rep. Kevin Brady, R-Texas, chairman of the House Ways and Means Committee and the GOP’S top tax writer, praised the passage of the bill.

We did it! The House has passed #TaxReform, one step closer to more jobs, bigger paychecks, and fairer taxes for Americans everywhere. pic.twitter.com/dLxDrBoS8n