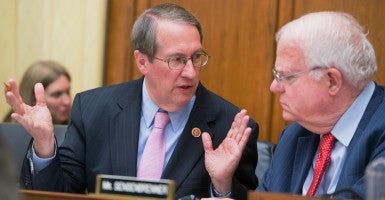 For the last few years, opponents of civil forfeiture have been calling on Congress to make it more difficult for law enforcement to take property, cash, and vehicles from innocent Americans through a process known as civil asset forfeiture.

Now, a bipartisan coalition of lawmakers on Capitol Hill is taking action.

“Forfeiture is a critical tool in the fight against crime, but it is also vulnerable to abuse. The Due Process Act, among other things, will increase transparency and add protections for innocent property owners, including the opportunity to contest seizures and regain illegally seized property immediately,” Sensenbrenner said in a statement. “Reform to the current federal forfeiture laws is necessary to curb abuse, restore confidence in law enforcement, and help citizens protect their property rights.”

The legislation would raise the burden of proof from a “preponderance of evidence” to “clear and convincing,” which makes it more difficult for the government to forfeit property, especially from innocent people.

Under the Due Process Act, or the Deterring Undue Enforcement by Protecting Rights of Citizens from Excessive Searches and Seizures Act of 2016, the burden would also be shifted away from the property owner and on to the government to prove that there was a “substantial connection” between seized property and criminal activity.

Under current civil forfeiture law, property owners fighting a seizure must prove that their seized assets are not connected to criminal activity or that they didn’t know the property was being used in a crime.

Sensenbrenner’s bill would also increase transparency among federal agencies seizing property and calls for an annual audit of civil forfeitures. The Due Process Act further creates a publicly available database of all federal forfeitures.

In addition to making it more difficult for lawmen to forfeit property, particularly from innocent property owners, the bipartisan legislation creates a right to counsel for all property owners challenging a civil forfeiture and allows a property owner to recover lawyer’s fees if they successfully challenge a forfeiture against the government.

The Due Process Act also codifies policy changes implemented by the Justice Department and Internal Revenue Service regarding structuring.

Under a subset of civil forfeiture laws regulating cash deposits, the government can seize money from those accused of committing structuring violations.

However, many cases have arisen in recent years involving small business owners who had thousands of dollars seized by the IRS for committing structuring violations.

In many of those instances, property owners were unaware they were breaking the law and were ultimately never charged with a crime.

Both the IRS and Justice Department announced in 2014 and 2015, respectively, they would only pursue structuring cases if the property owner had been charged with a crime or if the money was used for criminal activity.

But experts encouraged Congress to codify those policy changes.

“Today’s introduction of the Due Process Act is a tremendous step forward for the rights of innocent property owners,” Jason Snead, a policy analyst at The Heritage Foundation, told The Daily Signal. “The act adopts many of the reforms advocated for by Heritage and a broad coalition of organizations.”

Though the Due Process Act addresses key issues opponents of civil forfeiture have with the tool, it doesn’t take aim at the Justice Department’s Equitable Sharing program or the profit incentive civil forfeiture creates for law enforcement agencies.

Furthermore, at the federal level and in many states, law enforcement agencies can keep 100 percent of the proceeds from forfeitures if they’re not seized under Equitable Sharing.

“It is unfortunate that neither the Equitable Sharing program nor the broader financial incentives in forfeiture law have been addressed,” Snead said. “So long as agencies can retain and spend the proceeds they generate from the forcible seizure of property, there will be a temptation to abuse forfeiture laws to generate revenue.”

In speaking publicly about civil forfeiture, law enforcement officials have praised the tool for providing agencies with money outside of the normal budget process.

Civil asset forfeiture is a tool that gives law enforcement the power to seize property if they suspect it’s tied to a crime.

Law enforcement ramped up the use of civil forfeiture to combat the war on drugs in the 1980s. However, in recent years, many innocent Americans have been caught up in the forfeiture system after having cash, cars, and property seized.

Many of those people were ultimately never charged with a crime.

However, the legislation didn’t move through House or Senate committees.