The French Ambassador Insulted US on Pearl Harbor Day. Here’s Why He Shouldn’t Be Talking. 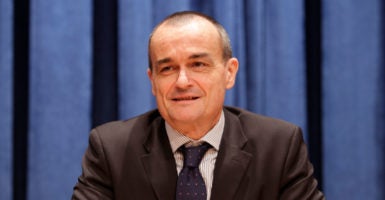 When it comes to who did the most to stop the Nazis in World War II, it would generally be best for France to remain quiet.

Yet, in the tradition of infamous French Ambassador to the United States Citizen Genet—who had to be recalled under George Washington’s administration for meddling in American politics and generally instigating the American people—France’s modern ambassador decided to stir up a hornets nest on Pearl Harbor Day.

Ambassador Gerard Araud said in a tweet that was quickly deleted, “In this Pearl Harbor day, we should remember that the US refused to side with France and UK to confront fascist powers in 1930s.”

This is the French ambassador to the United States. https://t.co/ktxotNhtBX

On this day, we should remember that five French divisions marched with Nazis against the Allies, that Vichy France exceeded its quotas of Jews demanded by Germany for the death camps, and that the first Americans killed in North Africa were by French troops on the side of Nazis. pic.twitter.com/DVbuMwMfOn

The French Ambassador just blocked me.

The cheese-eating surrender monkey who, on Pearl Harbor Day, suggested we had it coming just blocked me.

Hey @GerardAraud maybe you should hang out in this piece of your own country for a little while. pic.twitter.com/k1awHAtYXe

French ambassador deleted this faster than his country could raise the white flag. If it weren't for the allies, you'd be speaking German pic.twitter.com/66KHRLRNBT

The French ambassador tried to make up for his faux pas with qualifications, but the damage was already done.

UK, France and US committed awful mistakes in the 30s. Because of its geography, France was the first to pay for them. https://t.co/EY0hjoF3KT

Plenty have already commented on Araud’s statement and blasted it, but this must be said: Pearl Harbor, one of the darkest days in American history, meant salvation from tyranny for his country and for billions yet unborn.

British Prime Minister Winston Churchill wrote of his feeling after he was notified of the Pearl Harbor attack, “Being saturated and satiated with emotion and sensation, I went to bed and slept the sleep of the saved and thankful.”

It would be appropriate for an ambassador to show a little more respect rather than, well, rudeness.

The French ambassador’s statement might have rung more true, even if inappropriate, if it came from the Poles who were crushed by the vast might of Soviet and German armies, yet fought ferociously anyway with little help.

But it was particularly galling coming from France.

While Americans sometimes have a little too low an opinion of France’s historic military capabilities, France’s collapse early in World War II led to the Nazi domination of Europe and the deadliest war in human history.

The French, who had fought so bravely in World War I, put on a miserable showing in World War II, and so cemented a stereotype of haplessness that has pervaded the American mind ever since.

And it didn’t have to happen. Militarily, the French were not nearly as inferior to the German military as is sometimes thought. In some ways, French technology was superior to the vaunted German Wehrmacht.

The French ambassador’s statement on Pearl Harbor Day was galling, inane, pig headed, and wrong. Yet, it is worth reflecting on the stage that Pearl Harbor set for a war we would never want to repeat.

Certainly, the Allied powers made some mistakes in the lead-up to World War II that had horrible consequences and lessons for today.

“Deterrence is not predicated on material capability alone.”

This is one of the key takeaways from Victor Davis Hanson’s excellent new book, “The Second World Wars: How the First Global Conflict Was Fought and Won,” which instead of simply delivering a timeline history of World War II, explains why the war happened and how it was won and lost.

Hanson, a senior fellow in classics and military history at the Hoover Institution, and author of numerous book on history and war, perfectly captures how the Axis powers of Germany, Japan, and Italy started a global war they couldn’t win and offers a warning for today.

Less well known is how the Western powers pursued decades of policy and rhetoric to demonstrate to the world that they would avoid war at almost any cost, thereby dooming themselves to be entangled in a global cataclysm.

Hanson writes in the book that “confusion characterized preludes to war during the 1930s.” The democracies “had naively assumed that even non-democratic European nations such as Nazi Germany … [would] have no desire to repeat the appalling bloodletting of the Somme and Verdun in 1916.”

Hanson explained at a Heritage Foundation event in November that little was done to dissuade Nazi Germany from believing its opponents were weak and rotted out.

For instance, Holland “abandoned the word ‘destroyer’” as a term for warships because it sounded too militant, according to Hanson. And France stopped paying tributes to its World War I victory at Verdun.

Hanson said this rhetoric convinced Hitler that the Allies “had no belly” for war.

The result was the worst catastrophe in the history of human civilization.

But it should never have happened. The Axis powers didn’t have the capacity to wage and win the kind of war that the series of conflicts turned into.

While it was the Axis who started the war, and early on appeared to be unstoppable, only the Allies possessed the capacity to not only win wars on their borders, but take the fight to the enemies’ homelands and conquer them.

Before World War II, the United States had the 19th-largest military in the world, had only about 200,000 active-duty soldiers, and was caught in the throes of a depression. This concealed the fact that the U.S. was actually capable of unleashing its war-making capacity far beyond anything Germany, Japan, or Italy could comprehend.

By the end of the war, America had an 8 million-man force deployed across the globe, a navy larger than all other navies combined, and a wartime gross domestic product that surpassed all other belligerents, again, combined.

In other words, the U.S. alone was a ruthlessly strong nation, but when added with its powerful allies, the Soviet Union and Great Britain, the Axis were hopelessly outclassed.

Even Great Britain, the “weakest” of the major Allied powers, matched and sometimes surpassed German productivity in many crucial areas, even after the Nazi regime gained control of almost all of continental Europe.

Unfortunately, weakness projected by the Western powers prior to the war helped give the Axis a false notion that they could essentially conduct a series of smaller wars unimpeded. When this idea was combined with the stunning and almost unimaginable collapse of France early in the war, a regional conflict quickly snowballed into a global one.

The productive capacity of the Allies eventually tipped the war in their favor, but not before the Axis were able to exact a heavy human toll on the Allies.

“In sum,” Hanson wrote, “victory in World War II was a morality tale of production besting killing: Those who made more stuff beat those who killed more people.”

In his talk at Heritage, Hanson explained how we should take some of these lessons to heart today.

Importantly, we should recognize that “human nature is constant throughout time and space.”

Failing to communicate to other regimes, like China or North Korea, that we are a behemoth that shouldn’t be trifled with is a mistake. For instance, Hanson noted, “We can destroy North Korea in minutes,” but they may not understand that we can if provoked.

“I was worried the last eight years because we had conveyed a false impression to the world that even though we have overwhelming strength,” other potentially hostile regimes might be given the impression that isn’t the case.

While the media and political class have reacted negatively to President Donald Trump’s more militant statements, Hanson said that ultimately, “no wars started because of a bellicose statement.”

Instead, they begin because the enemy perceives weakness that can be exploited for easy gain.

This is a timely message for current and future generations who stand more and more removed from the events of World War II, in which only enormous sacrifices and raw power prevented the world from falling into darkness.

The key for us today, for all free people who owe an unpayable debt to the strength of the allied armies who won the war, is in preventing such a calamity from taking place again.

Peace through strength is no mere slogan.