How Curbing Washer Imports Could Send US Jobs Down the Drain 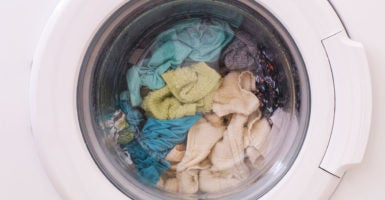 The International Trade Commission recently announced recommendations for the U.S. to impose tariffs of up to 50 percent on washing machine imports exceeding a quota of 1.2 million units annually.

The recommendation has been passed along to President Donald Trump, giving him 60 days to reach a final decision.

This announcement comes on the heels of the trade commission-backed claim that foreign competitors, Samsung and LG, are “injuring” the domestic washing machine—specifically, Michigan-based manufacturer Whirlpool.

If Trump decides to take the commission’s recommendation, Americans will quickly begin to see fewer washing machine options and higher prices on the common household appliance.

The protectionist move against LG and Samsung comes, perversely, just as those companies are set to employ thousands of Americans in Tennessee and South Carolina.

It may also inadvertently put the final nail in the coffin of one of the longest-standing bastions of the American service industry, Sears Holdings Corp. For more than a century, Sears has employed thousands of Americans, and despite recent store closures, still employs roughly 140,000 people in the U.S. today, with more than 6,000 of those employees in service technician roles for home warranties on appliance products.

In an attempt to move in the direction of modern and high-tech washing machines, Sears recently awarded a contract to LG for the production of some of Sears’ own Kenmore brand of washers. The washers were previously supplied by Whirlpool. Disagreements over cost contributed to the change of suppliers.

Making it more expensive for LG to import the washers it produces for Kenmore, one of Sears’ most popular product lines, will jeopardize the retailer’s efforts to revitalize its brand.

American trade rules should make the process of buying and selling easier, not more difficult.

Restricting washer imports may help Whirlpool, but will hurt other American companies—and American consumers as well.

Trump should reject the remedy proposal put forth by the International Trade Commission. Doing so would keep the government’s thumb off the scale in the washer industry and allow consumers to purchase the products they prefer at the best prices possible.