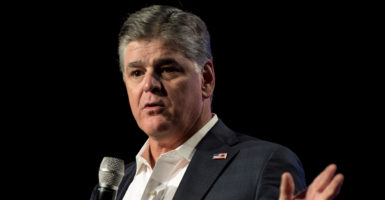 Sean Hannity received the Outstanding Impact Award for his work on television and the radio fighting for the conservative movement. (Photo: Brian Cahn/ZUMA Press/Newscom)

United in Purpose, “a nonprofit organization whose mission is to unite and equip conservatives in the promotion of Judeo-Christian principles,” gave the inaugural Impact Awards to 12 conservative leaders. The conservatives were chosen by a committee of 19 members, with criteria for consideration including tenacity, courage, and perseverance under attack.

The award program was hosted by Ginni Thomas of Liberty Consulting at Trump International Hotel in Washington, D.C.

“America’s liberties are at great risk, and institutions and values that have stood the test of time are under attack,” said Thomas, wife of Justice Clarence Thomas. “Some refuse to fight when it gets as hard as it is—they make peace with the hope that no one swarms them, or threatens them. The leaders we lift up today to be honored for the Impact Awards are the bravest, most effective, most dedicated, determined warriors defending the values that are the real strength of America.”

The Outstanding Impact Award was given to Hannity, who was the keynote speaker.

“The fight is greater than ever for truth, and perseverance is necessary in the battle against fake news and the determination to get to the truth,” Hannity said. “Under President [Donald] Trump, the forgotten man is forgotten no more, and we the people are going to work harder than ever to get the government back into the hands of American citizens; where it belongs.”

According to United in Purpose, Viguerie created the largest list of conservative active donors, and after he started in 1965, his list went from from 12,500 donors to 125,000 in one year. United in Purpose credited his list to helping start the Reagan revolution, Republicans taking the House in 1994, and Republicans taking the House again in 2010.