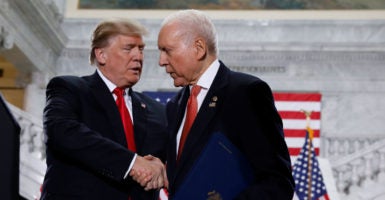 The president announced reductions to two national monuments in southern Utah to make these designations consistent with the law.

Bears Ears National Monument, designated by President Barack Obama in 2016 less than a month before Trump took office, is being reduced by over 80 percent—from 1.5 million acres to 228,784 acres. The remaining 1.3 million acres will be restored to the previous land management plans under the Forest Service and Bureau of Land Management.

In addition, the Grand Staircase Escalante National Monument, designated by President Bill Clinton in 1996, is being reduced by about 45 percent and separated into three units.

The purpose of the Antiquities Act is in the name—to protect antiquities, or artifacts such as fossils or Native American ruins on federal lands.

In 1906, Congress gave the president the power to designate federal lands as national monuments. According to the law, these lands must constitute “the smallest area compatible with the proper care and management of the objects to be protected.”

Before that, only 71 million acres were set aside by all previous presidents combined.

Presidents have used the law to protect characteristics such as remote pieces of land and beautiful views. While there’s nothing necessarily bad about preserving a certain nice view, that falls outside the purposes of the Antiquities Act.

Marine monuments made by Presidents Clinton and George W. Bush are legally questionable at best, given the Antiquities Act’s clear emphasis on protecting artifacts on land and that some of the waters protected are not owned by the United States. Other past designations have engulfed state and private lands.

In seizing these lands, presidents have acutely affected the lives of the people who live and work around them, and their optimistic promises have sometimes failed to pan out.

When Clinton created the Grand Staircase Escalante in 1996, he guaranteed historic levels of livestock grazing, which has been a critical part of the local economy since the 1800s.

Yet 20 years later, the Department of the Interior has yet to finalize a grazing management plan, making neither ranchers nor environmental activists happy. The consequence is that grazing has declined by one-third as ranchers are not free to manage overgrowth, water lines, and fences.

Far too often in the process of reviewing monument designations, Trump’s opponents have misled the public on what these designations actually mean. For example, Center for Biological Diversity Public Lands Program Director Randi Spivak said:

Trump’s unprecedented attack on the monuments would be another affront to Native Americans and a disgrace to the office of president. He wants to turn public lands over to corporations to mine, frack, bulldoze and clear-cut until there’s nothing left.

Such responses are irresponsible and lack meaningful critique of Trump’s actions Monday.

In fact, Trump was not the first president to reduce the size of monuments, and his administration in fact met with Native Americans on both sides of the issue. His decision is far from one that would unleash an unchecked industrial apocalypse.

Congress always has the authority to designate lands as national parks or other land designations like wilderness lands.

In his initial report to the president, Interior Secretary Ryan Zinke rightly noted that “the executive power under the Act is not a substitute for a lack of congressional action on protective land designations.”

The Trump administration has taken an important step in elevating the issue and making corrections, though more are needed. It’s time for Congress to step in.

If Congress doesn’t like what the Trump administration is doing, it ought to clarify the law. Better yet, Congress could repeal or reform the law to give states a much greater say in what happens to the lands within their borders.

Presidential action, no matter how good, is not a long-lasting solution. Legislation is what will last for generations. It’s time to reform the Antiquities Act to rein in the presidential power to seize land at the stroke of a pen.