Obama’s Last-Minute Land Grab Was Bad for Utah. Trump Is Showing He Hears the People. 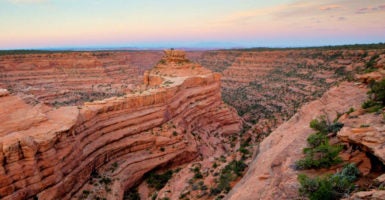 During the Christmas season last year, the Obama administration ignored the majority of Utahans by designating a vast tract of land in southern Utah as a national monument.

Last week, the Department of the Interior took a welcome step toward reversing this executive abuse and returning to a legislative solution.

There is no doubt that specific sites within the new monument demonstrate historic, scientific, as well as cultural and spiritual significance. Native American tribes believe the area is sacred. And every citizen can appreciate the natural beauty of the sandstone buttes that gave the area its name.

However, the Antiquities Act is very clear that monument designations should be limited to “the smallest area compatible with the proper care and management of the objects to be protected.”

Presidents have ignored this important qualifier in the past, locking up millions of acres that could be managed as multiple-use.

In most cases, these expansive monuments have drawn support not from local citizens, but from outside interest groups who may not have locals’ best interests at heart, including outdoor recreation corporations and environmental activists who oppose new development.

Unsurprisingly, these unilateral monument designations have been resented by locals who sensed they were being stripped of control over their homes.

President Bill Clinton provoked anger in 1996 when he abruptly announced the transformation of 1.9 million acres in the Grand Staircase-Escalante area into a national monument.

Obama’s designation has provoked a similar response. Public opinion polling consistently finds that a majority of Utahans oppose the monument.

These Utahans want a say in how their land is governed, and this week the Department of the Interior, led by Secretary Ryan Zinke, released a report informed by their concerns.

The report made it clear that the Obama administration abused the Antiquities Act and recommended that President Donald Trump reduce the monument boundary.

It also recommended that Congress craft a legislative solution to protect the landscape and allow tribal co-management of important cultural areas in the Bears Ears area.

We should not reward the executive branch for making unilateral decisions about our lands. If Obama’s abuse of the Antiquities Act is allowed to stand, future abuses will not be far behind.

Decisions should instead be made by elected members of Congress with plenty of input from the general public—especially the local residents whose lives are affected by these decisions.

Thankfully, the current administration is signaling that it hears the people of Utah. Last week’s report is a victory and a promising first step toward reversing Obama’s monument designation.

The Department of the Interior will release a comprehensive report in late August detailing specific policy recommendations for Bear Ears and 26 other large national monuments.