Don’t Fall for Nancy Pelosi’s Virtue Signaling. Here Are the Sleazy Democrats She Has Enabled. 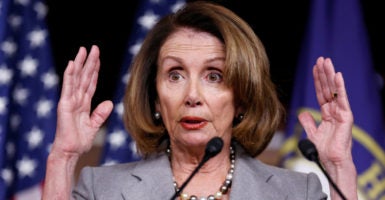 The Democratic “shero” is, and always has been, a sham. But after Pelosi’s incoherent appearance on “Meet the Press” defending Rep. John Conyers, D-Mich., and Al Franken, D-Minn., the progressive left can no longer mask her apologism.

Pelosi milked her XX chromosomes for all their electoral worth. Her official biography brags about her role as “the most powerful woman in American politics” and her induction into the National Women’s Hall of Fame.

So, feminists were aghast when Pelosi hailed Conyers as an “icon” and downplayed news of his secret sexual harassment settlement with a former female staffer—one of three former employees alleging sexual abuse.

But this is far from the first time see-no-evil Nancy has looked the other way at Democrats. I’ve been reporting on her creep-enabling for years.

Let me cure the left-wing political and media establishment’s amnesia:

Lost in the aftermath of Weiner’s nude selfie and sexting scandals is the fact that Pelosi refused to condemn him until his interactions with an underage girl in Delaware were exposed by conservative bloggers and confirmed by police. Only then did champion-of-women Pelosi rush from behind to lead the demands for Weiner’s resignation.

In 2010, the married Massa resigned amid a sordid sexual harassment scandal involving young, low-paid male staffers he allegedly lured to his Capitol Hill playhouse for “tickle fights.” Turned out that Pelosi’s office had been informed months before, by a staffer of former Democratic Massachusetts Rep. Barney Frank, of Massa’s predatory and harassing behavior with multiple congressional employees.

“I have a job to do and not to be the receiver of rumors,” she deflected icily.

The seven-term liberal congressman had a longstanding history of alcoholism and sexual skeeviness that broke into the public eye when his own staffers revolted against their drunk-texting, Tigger costume-wearing boss and pressured him to seek psychiatric help. House Democrat leaders, desperate to keep one of their own in office, ignored the pleas.

Only after The Oregonian newspaper published allegations by a teenage girl who had complained for months to apathetic Capitol Hill offices of an “unwanted sexual encounter” with Wu did Pelosi make a show of calling for a House Ethics Committee investigation—which went, you guessed it, nowhere.

Last month, Pelosi climbed aboard the #MeToo bandwagon in the wake of the Harvey Weinstein sexual abuse scandal. “Your courage is truly inspiring to us all,” she tweeted.

But when multiple women accused her old friend, former Democrat Congressman and San Diego Mayor Bob Filner, of harassment and assault, Pelosi indignantly refused to call on him to resign.

One staffer claimed Filner had ordered her to “work without her panties on.” Others alleged he forcibly kissed them. Another said she had contacted Democratic higher-ups in California about a half-dozen women, but nobody did nuttin’.

“What goes on in San Diego is up to the people of San Diego. I’m not here to make any judgments,” Pelosi sniffed.

Of the Democratic lion of the Senate whose public boorishness culminated in the infamous “Waitress Sandwich” with fellow Democratic Sen. Chris Dodd of Connecticut, Pelosi effused:

Rooted in his deep patriotism, his abiding faith and his deep concern for the least among us, no one has done more than Senator Kennedy to educate our children, care for our seniors, and ensure equality for all Americans.

The Democratic Bad Boys Club has had no better cheerleader than Nancy Pelosi.