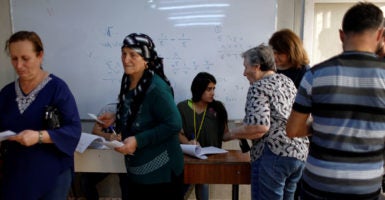 As Christians in the Middle East continue to suffer persecution, this week was observed as “A Week of Awareness and Education for Persecuted Christians.”

In June 2014, the terrorist army Islamic State, also known as  ISIS or ISIL, took over northern Iraq and drove out hundreds of thousands of Christians. Mosul alone lost 500,000 residents, who fled the city to escape the imminent threat, Vatican Radio said.

When it comes to targeting Christians, Iraq is the seventh-most persecuted country in the world, according to Open Doors’ World Watch List.

According to Gulf News Iraq, “nearly all of Bakhdida’s 50,000 residents fled overland to [Irbil], the capital of the Iraqi region of Kurdistan, for protection.”

On Tuesday, the Knights of Columbus, along with church leaders from Iraq, hosted a panel discussion at the National Press Club in Washington. Along with the U.S. Conference of Catholic Bishops, they have promoted Nov. 26 to Nov. 30 as a week of awareness of, and education about, the persecution of Christians.

Since the June 2014 attack in Iraq, the Knights of Columbus said it has contributed $17 million to provide food, shelter, and education to refugees, along with helping them resettle in Nineveh. It also published a report in 2016 with 140,000 signatures to get Congress and the State Department to declare the attacks to be an act of genocide.

Carl Anderson, the CEO of the Knights of Columbus, announced recently that Vice President Mike Pence had declared funding from the administration will reach victims of ISIS attacks.

“Just as important as driving ISIS out of existence,” Pence said at the In Defense of Christians Solidarity Dinner in Washington in late October, “is making sure that we provide aid and comfort to those who have suffered so much loss and grief, and ensure that they can avail themselves of their right to return.”

Pence promised that the U.S. will continue to provide aid to persecuted Christians, despite the administration cutting 31 percent of its international affairs budget, according to The Atlantic.

“[This aid is] commendable,” Anderson said. “And we are hopeful, because [Pence] specifically called for our government to work with the people assisting the communities on the ground.”

Catholic Archbishop Bashar Matti Warda of Irbil has cared for more than 15,000 persecuted Christians since 2014. Many refugees now reside in his archdiocese and are supplied with shelter, food, clothes, and education. He also played a role in helping displaced Christians return to their homes in Nineveh.

“Knowing that we’re not forgotten gives us hope,” Warda said. “We hope that Christians in the West will also learn from the grave witness of our people for their faith.”

Others on the National Press Club panel included Father Salar Kajo from Teleskof, Iraq; Stephen Rasche, general counsel for the Archdiocese of Irbil; and Andrew Walther, vice president of communications and strategic planning at the Knights of Columbus.

All of them expressed their thanks to the U.S. for its efforts to establish peace for Christians in Iraq.