How US Can Keep ISIS From Taking Root in Afghanistan 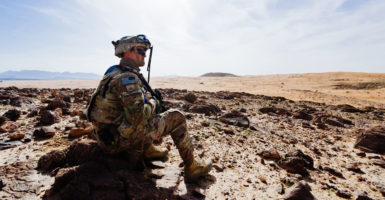 Nathaniel DeBevoise is a member of the Young Leaders Program at The Heritage Foundation.

As the territorial integrity of ISIS’ “caliphate” in Iraq and Syria erodes, the terror group now finds itself looking to its contingent group in Afghanistan, known as the Islamic State in Khorasan, or IS-K, in order to maintain its operations.

In the northern Afghan province of Jowzjan, IS-K has been actively recruiting fighters associated with al-Qaeda, the Taliban, and the Islamic Movement of Uzbekistan.

But the terror groups in Afghanistan are hardly unified. As ISIS makes inroads there, competition among various groups is emerging, with each seeking to tap into a common pool of militants.

This growth of militant organizations makes the Trump administration’s new aggressive strategy all the more vital.

A key part of this strategy dates back to the original U.S. mission from 2001: denying terrorists a safe haven from which to plot terrorist attacks. It also includes the more recent measure of holding Pakistan accountable for the role it has played in destabilizing the region.

One of the most critical changes in the new strategy is the removal of cumbersome, Obama-era restrictions on the use of U.S. air power.

Under the Obama administration, the U.S. only allowed the use of airstrikes when U.S. or coalition forces were under imminent attack. Now, under the new policy, commanders on the ground have broader authority to use airstrikes as they see fit.

The effects of this change have already produced an obvious result.

From the time the Afghan strategy was unveiled in August 2017 to Dec. 31, 2017, the U.S. carried out around 2,000 airstrikes against the Taliban and associated groups. This is nearly as many airstrikes as in all of 2015 and 2016 combined. Almost one-quarter of these strikes (455) occurred in December, compared with a mere 65 in the same time period the year before.

On a related note, in November 2017, U.S. and coalition forces conducted joint operations that produced a devastating result against Taliban drug labs. These joint operations destroyed at least 25 labs and have reportedly cost the Taliban upward of $20 million in lost revenue.

In the most recent development, which occurred on April 9 of this year, one of Afghanistan’s most powerful warlords—Qari Hekmatullah—was killed in the northern Afghan province of Fayab by a U.S. airstrike. Hekmatullah was previously a member of the Taliban, but departed in favor of leading the northern branch of IS-K.

After switching allegiances, Hekmatullah had survived several Taliban attempts to oust him from northern Afghanistan. Hekmatullah proved resilient against those attempts and continued to play a critical role in recruiting militants for IS-K.

Hekmatullah’s death comes at a time of renewed military pressure on IS-K from both Afghan and U.S. special operations forces. According to NATO, these factors have reduced IS-K to an isolated group devoid of leadership.

This new Afghan strategy is a breath of fresh air in what is now America’s longest war. This new approach may be exactly what is required not only to prevent ISIS from establishing itself in the country, but to break past the security stalemate that has characterized this conflict for so long.

The Trump administration should measure its success in Afghanistan incrementally, based on conditions on the ground and with an eye toward the future. As a Taliban commander once mused, “You [the West] have the watches, but we have the time.”

We would be wise to consider that statement and disavow any lofty, short-term expectations in favor of a realistic outlook that embraces the true, protracted nature of America’s longest war.