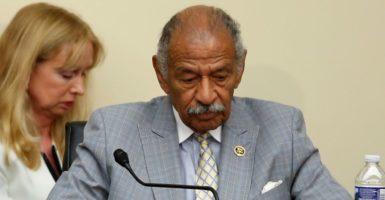 Staffers who are the targets of unwanted sexual advances on Capitol Hill should not have to endure a lengthy mediation process and pay the legal bills as lawmakers secretly draw on a mysterious slush fund to settle the accusations against them, an advocate for taxpayers argues.

In the event of a monetary settlement of sexual harassment complaints, members of Congress can draw on a taxpayer-funded account set up within the Treasury Department to cover their legal expenses and settle cases.

The account has paid out $17 million in the past 10 years, public records show, although it is not clear how much of that was for cases of sexual harassment.

“Right now, it’s very unclear to the taxpayer where this money is going,” Grace Morgan, director of external affairs for the Washington-based Taxpayers Protection Alliance, told The Daily Signal in a phone interview.

The spotlight fell on the question of sexual harassment on Capitol Hill after the scandal that brought down Hollywood producer Harvey Weinstein prompted dozens of women, and men, to blow the whistle on the sexually predatory practices of major business, entertainment, and media figures ranging from actor Kevin Spacey to news anchor Charlie Rose.

Rep. John Conyers, D-Mich., the longest-serving member of Congress, has been accused of sexual harassment by two former staffers. Several women, although none of them staffers, also accuse Sen. Al Franken, D-Minn., of groping them.

When a congressional staffer decides to press ahead with allegations of sexual harassment, he or she must navigate a four-step process administered through an agency called the Office of Compliance. The steps: counseling, mediation,  administrative hearing or civil action, and appeals.

“This turns out to be a 180-day process, and it’s not very fair or just to the victims,” Morgan said.

Nor is the amount paid out as the result of sexual harassment accusations against lawmakers currently public information, she said.

“We also need a full investigation into the $17 million and what has been paid to victims, how much involves sexual harassment claims and how this impacts taxpayers,” Morgan said.

Sen. Al Franken on sexual misconduct allegations: "I have to regain the trust of people I've let down…I am going to continue fighting for the things that I believe in." https://t.co/2HsWGVEiH1 pic.twitter.com/eXkrSFFXWz

For starters, the Senate passed a resolution requiring training on sexual harassment for senators and their staff. The House was expected to follow suit Wednesday.

Although an “initial spike” in sexual harassment complaints is likely to occur when new procedures go into effect, congressional employees will benefit over the long term from a healthier workplace, Rep. Barbara Comstock, R-Va., told The Daily Signal in a phone interview Monday.

Comstock, sponsor of a resolution targeting sexual harassment and discrimination that has attracted broad, bipartisan support, said she expects the House to adopt it.

The resolution would require “all House members, officers, employees, including interns, detailees, and fellows” to complete “anti-harassment and anti-discrimination training” during each annual session of Congress.

Comstock said she also will explore a legislative fix aimed at preventing the use of taxpayers’ money to cover settlement expenses when employees accuse lawmakers of sexual harassment.

Where the current, 115th Congress is concerned, individual lawmakers and staffers must complete training no later than 180 days after its second one-year session begins in January.

The House vote Wednesday marks a “watershed moment” of bipartisan support for a resolution that will begin a step-by-step process for implementing “fundamental reforms that change how [sexual] harassment is detected and prevented,” Comstock told The Daily Signal.

“We are looking at what can be done by resolution and what needs to be done legislatively,” the Virginia Republican said:

What we want is a zero-tolerance policy for this kind of behavior and a changed culture so that people can be free from this kind of harassment. We would also like to streamline the process for victims to come forward with any complaints so that it is not so long and drawn out. It should be a victim-friendly process.

BuzzFeed first reported that Conyers, the senior Democrat on the House Judiciary Committee, reached a settlement in 2015 with a former staffer in a wrongful dismissal complaint. She alleged that she was the victim of unwanted sexual advances from Conyers, now 88.

Conyers “repeatedly made sexual advances to female staff that included requests for sex acts, contacting and transporting other women with whom they believed Conyers was having affairs, caressing their hands sexually, and rubbing their legs and backs in public,” BuzzFeed reported.

Tuesday morning, news broke that another former staff member had leveled accusations against the congressman.

The accuser, Deanna Maher, said Conyers made unwanted sexual advances toward her on three different occasions while she ran his district office in Michigan between 1997 and 2005, according to the Detroit News and other media reports.

Four women have come forward to accuse Franken, 66, of sexual harassment, beginning with Leeann Tweeden, a radio talk show host who described his behavior during a USO tour in 2006, two years before he was elected senator. Another woman, Lindsay Menz, said Franken groped her while having his photo taken with her at the 2010 Minnesota State Fair.

Another former aide to Democratic Rep. John Conyers of Michigan is accusing him of sexual harassment https://t.co/Cms50TwuNj pic.twitter.com/hYrFj5ySWi

Looking ahead, Comstock said she would like to see additional steps taken to ensure taxpayers would not be on the hook to cover legal settlements following allegations of sexual harassment.

“For that, we would need new legislation,” she said.

The House Administration Committee scheduled a hearing for Dec. 7 to review possible actions under the Congressional Accountability Act, the 1995 law specifying that certain civil rights, labor, workplace, and health care laws must apply to Congress.

That law also created an independent agency, the Office of Compliance, which is led by a five-member, nonpartisan board of directors and four executive staff members appointed by the board.

The Office of Compliance is charged with advising members of Congress, congressional staff, and visiting members of the public on their rights and their responsibilities in the workplace setting.

The office also offers advice on potential changes to the Congressional Accountability Act. Its general counsel has independent investigatory and enforcement authority for certain violations of the law.

‘Needs to Be Reformed’

After receiving multiple media inquiries about taxpayers’ money being used to cover the costs of settling sexual harassment allegations against lawmakers or legislative branch employees, Susan Tsui Grundmann, executive director of the Office of Compliance, released figures showing more than $17 million has been spent since 1997 to cover the settlements.

Not all of the complaints covered by the $17 million involved sexual harassment. Some were allegations made under the Americans with Disabilities Act, while others involved potential civil rights infractions.

Neither Grundmann nor other officials have made public a detailed breakdown of how and why the $17 million was spent.

The idea behind the Congressional Accountability Act was to apply the same set of anti-discrimination and civil rights laws governing other Americans to members of Congress and their staffs. But the 1995 law created a taxpayer-financed “Awards and Settlements” account in the Treasury Department to cover the cost of legal settlements.

The Taxpayers Protection Alliance, which is nonpartisan, focuses on educating the public about the effects of excessive taxation and spending at all levels of government.

Morgan, the organization’s director of external affairs, said the settlements fund appears to be used to insulate Congress from much-needed accountability and transparency.

“I would like to see a system where members of Congress themselves have to pay the settlement, or they have to go through the dispute process,” Morgan said in the interview, adding:

As it stands now, the victim has to pay for her own legal fees,  where the member of Congress gets the federal funding for their lawyer. It’s a very long, drawn-out process that needs to be reformed.

The Office of Compliance would be responsible for administering the training created by the House resolution.

You can watch my full interview on @ThisWeekABC with @RepSpeier, @DonnaFEdwards, and @ZainabSalbi where we discussed sexual harassment in Congress and the bipartisan Resolution that we will be voting on this week. https://t.co/FFsgtLKB58 #VA10 pic.twitter.com/rpJixkFeX1

Comstock said she anticipates more complaints will be filed against members of both the House and Senate as employees become more familiar with what sexual harassment is.

“We might see an initial spike in the number of complaints as people develop a better understanding of what constitutes harassment,” the Virginia Republican said. “But the end result will be a more positive, healthy work environment.”

Congress could learn from how corporate America and the military moved to address questions of sexual harassment, she said. Both institutions have wrestled with similar issues for many years and their procedural changes could be instructive, she said.

“They have addressed this problem very aggressively,” Comstock said, and she believes in-person training is more effective than online sessions.

In a change long familiar to many other workplaces, the House resolution would require every lawmaker’s office to post “a statement of the rights and protections provided to employees of the House of Representatives under the Congressional Accountability Act of 1995.”

What happens next, assuming the House adopts the resolution Wednesday, will become more clear after the Administration Committee’s Dec. 7 hearing.

While it may be challenging for Americans inside and outside Congress to come to terms with misconduct that involves public officials who agree with their political views, Comstock said, the safety and well-being of employees should be paramount.

“I think it’s best to stay out of the team politics and instead focus on the right policies,” she said.