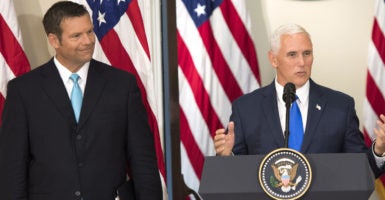 Vice President Mike Pence, flanked by Kansas Secretary of State Kris Kobach, speaks July 19 at the first meeting of the Presidential Advisory Commission on Election Integrity at the Eisenhower Executive Office Building in Washington. Pence Is chairman of the commission and Kobach is vice chairman. (Photo: Kevin Dietsch/UPI/Newscom)

Many of the states refusing to cooperate with President Donald Trump’s election commission aren’t in compliance with federal law on maintaining voter registration lists, according to government watchdog groups.

So far, 18 states and the District of Columbia have declined or are still considering whether to provide election data to the Presidential Advisory Commission on Election Integrity, established in May to examine and prevent voter fraud, among other concerns.

The commission requested voter registration data from every state and the District and 14 states include counties where registered voters outnumbered eligible voters based on Census Bureau data, according to findings from Judicial Watch, a conservative legal group.

When dead people or those no longer living in a specific voting jurisdiction continue to be registered there, voter integrity advocates argue, the likelihood for voter fraud increases.

The National Voter Registration Act of 1993, better known as the “motor voter” law, requires states to make a reasonable effort to remove the names of ineligible voters from official lists due to “the death of the registrant” or “a change in the residence of the registrant,” and ensure that noncitizens are not registered to vote.

Several states that initially declined to cooperate with the White House commission—New York and Mississippi among them—provided only partial information.

Red and blue states are among the uncooperative jurisdictions, watchdog groups say.

Kentucky, a decisively red state in previous elections, had the most counties where registered voters outnumber eligible voters. California, a strongly blue state, also had significant problems, according to findings from Judicial Watch and the Public Interest Legal Foundation, both conservative watchdog groups.

The states of Arizona, Illinois, and Indiana are still undecided.

“Overall, in most of the states not providing information to the commission, there are a significant number of counties with problems,” Robert Popper, senior attorney for Judicial Watch and director of its Election Integrity Project, told The Daily Signal, adding:

Since it began work in July, the White House commission has been under siege by litigation brought by liberal groups—and more recently by one of the panel’s own Democratic members, Maine Secretary of State Matt Dunlap.

Last month, the bipartisan commission, which initially had seven Republicans and five Democrats, was rocked by the death of Democrat David Dunn, a former Arkansas state legislator.

Commission member Hans von Spakovsky, a senior legal fellow at The Heritage Foundation, said it’s not a coincidence that states that aren’t cooperating have had voter registration issues.

“I don’t think these states want the public to find out how bad their voter rolls are and the amount of ineligible voters that are still registered,” von Spakovsky told The Daily Signal.

Judicial Watch last week announced it was suing Kentucky, after Secretary of State Alison Lundergan Grimes, a Democrat, refused to provide data to the commission and criticized its investigative efforts.

“Kentucky will not aid a commission that is at best a waste of taxpayer money and at worst an attempt to legitimize voter suppression efforts across the country,” Grimes said.

The Judicial Watch lawsuit contends that Kentucky doesn’t comply with the National Voter Registration Act because 48 of the state’s 120 counties—or 40 percent—list more registered voters than they have adult citizens eligible to vote.

The Kentucky secretary of state’s office did not respond to phone and email inquiries Tuesday from The Daily Signal.

In a statement published in several media outlets, however, Grimes spokesman Bradford Queen said the Judicial Watch lawsuit is “without merit” and is an attempt to “make it harder for people to vote.”

Since becoming secretary of state in 2011, he said, Grimes has used the law to remove 350,000 ineligible voters from the state’s voter rolls.

“We are nonpartisan and sued a very red state, but the fact is, Kentucky has the worst problem in the nation regarding invalid voters,” Popper said.

The Public Interest Legal Foundation did a separate study using somewhat different metrics. It also found that Kentucky surpassed all other states in apparent irregularities in the voter rolls, as home to 41 of the nation’s 248 counties across 24 states listing more registered voters than eligible adults.

“Voter fraud begins with corrupted voter rolls,” said J. Christian Adams, president of the Public Interest Legal Foundation and a member of the president’s commission, in a statement after the September study, adding:

Our nation’s voter rolls have records that cannot be distinguished between living or dead; citizen or alien; resident or relocated. We hear about possible cyberattacks, but we aren’t doing enough to fix voter rolls that are certainly corrupt. The voter rolls are so bad in some states that election officials would have a hard time telling the difference between sabotage and negligence.

Adams is a former lawyer in the voting rights section of the Justice Department.

Judicial Watch sent a “notice of violation” letter to California and 11 local jurisdictions in the state threatening to sue in federal court if they don’t clean their voter registration lists. For example, it said Los Angeles had 112 percent voter registration based on eligible voting population, San Diego had 138 percent, and San Francisco had 114 percent.

A spokesman from the California secretary of state’s office did not respond to phone and email inquiries Tuesday from The Daily Signal.

In June, California Secretary of State Alex Padilla, a Democrat, refused to provide voter lists to the commission, saying:

I will not provide sensitive voter information to a commission that has already inaccurately passed judgment that millions of Californians voted illegally. California’s participation would only serve to legitimize the false and already debunked claims of massive voter fraud made by the president, the vice president, and Mr. Kobach.

Popper said these states were chosen either because they had the most counties with suspect voter rolls, or, in some cases, a single populous county with problematic voter lists.

Most of the other states that either refused to cooperate with the election integrity commission or are still considering it have issues in some counties with voter list problems, Popper noted.

Where Questionable Numbers Are

According to Judicial Watch’s findings, two of 15 counties in Arizona, which is undecided about cooperating, list more registered voters than eligible voters. Two of eight counties in Connecticut, which has refused to cooperate, are not in compliance with the “motor voter” law regarding maintaining voter lists.

In Pence’s home state of Indiana, where the decision to cooperate with the White House commission is being held up by litigation, 34 of 92 counties have more registered than eligible voters.

In Maine, half of 16 counties have too many registered voters compared with those eligible, Popper said. In Maryland, it’s only two of 24 counties—Montgomery and Howard—but they are among the state’s largest.

Massachusetts has two of 14 counties that have too many registered voters, and in New Mexico it’s six of 33 counties.

Only two of Tennessee’s 95 counties have the issue, but Williamson County is one of the state’s largest, Popper noted. In Vermont, it’s four of 14 counties, and in Virginia, it’s 18 of 133 counties, Popper said.

As for other states that aren’t cooperating with the commission, South Carolina didn’t have any counties with the problem, Popper said, but election officials said the state won’t release data to anyone who isn’t a registered voter in the state.

That’s why Judicial Watch didn’t track their status, Popper said. Other states with this exemption from the “motor voter” law are Idaho, New Hampshire, and Wisconsin.