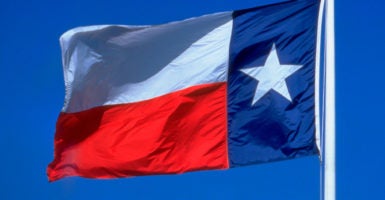 “It has been frustrating to many of us that the voice of conservatism ... finds it difficult to be heard on the floor of the Texas House of Representatives,” says state Rep. Jeff Leach. (Photo: Scott Teven Stock Connection Worldwide/Newscom)

Republicans in the Texas Statehouse say they dedicated a Freedom Caucus within the Legislature to advancing grassroots conservative values, and they hope the caucus will be a significant influence in the selection of the next speaker of the state House.

“Texas is a bright red state, a Republican stronghold, but it has been frustrating to many of us that the voice of conservatism, the voice of grassroots across our state, finds it difficult to be heard on the floor of the Texas House of Representatives,” state Rep. Jeff Leach, a member of the caucus, told The Daily Signal in an interview.

Texas Speaker of the House Joe Straus, who was elected to the post by many Democrats, but only about a dozen Republicans, according to The Federalist, is stepping down and will not be running for re-election in 2018.

State Rep. Matt Schaefer, a member of the Freedom Caucus, says this is an opportunity for even greater success in advancing conservative legislation.

“Liberty-minded Texans have a historic opportunity to influence the selection of the next speaker,” Schaefer said, adding, “This is a big moment and a big challenge, as this is the first open race for speaker since 1993. The next speaker must first gain the confidence of fellow Republicans, in contrast to Speaker Straus, whose base was primarily Democrats.”

The Texas Freedom Caucus, which was established in February, currently has 12 members.

“So we organized the House Freedom Caucus to amplify the voice of the grassroots and focus on the issues that are important to conservatives across the state and across the nation,” Leach said.

The Texas lawmaker, whose district includes portions of Dallas and Plano, said the caucus advances issues that the Republican grassroots seeks to protect.

Leach, who is the caucus’ policy director, says his position is all about helping to set the tone and agenda for what the members of the caucus will focus on.

“I view my role as keeping the group focused on the issues, the priorities, the pieces of legislation that really matter to the grass roots in terms of first principles and [on] policy items that we cared about, that we campaigned on, that conservatives care about,” Leach said.

The caucus adds members only through invitation, and current members say they want to start inviting additional members.

“We’ll be reviewing each and every member who comes to us wanting to be part of the Freedom Caucus for next session, and then we expect there to be a handful of new legislative members that win their elections next year in 2018 that come into the House in 2019 that will want to join our efforts as well,” Leach said

“And so, we’ll be busy in the interim. We’re already busy preparing internally and externally for January 2019.”

The Texas Constitution limits the Legislature’s regular session to only 140 calendar days and members are paid $600 a month, plus a per-diem allowance while in session.

“We all have lives and families, and business interests to make a living,” Schaefer said in an interview with The Daily Signal,

“And we go home when the Legislature ends, and the lobbyists and the bureaucrats stay there. They never leave. The gravitational forces in the Capitol pulled away from the liberty-minded grassroots,” he added.

Schaefer, who represents Texas’ 6th District, which includes parts of eastern Texas, says even though the Texas House Freedom Caucus is young, it has been instrumental in legislative victories.

“Because we were nimble and linked up to the grassroots, we actually had a great impact on the session, and were able to take a very weak [anti-]sanctuary cities bill, and amend it on the floor so that now it is the strongest in the country,” Schaefer said.

The Texas Legislature passed the bill in April, and Gov. Greg Abbott, a Republican, signed it into law in May.

“The sanctuary cities [bill] was one that the governor said he wanted … so the House leadership had to bring it to the floor, but they brought us a sandwich with no meat,” Schaefer said.

“I mean it was so weak, I think it stripped out some of the key provisions in it. Basically, the House bill, when it got to the floor, wouldn’t have applied to any sanctuary city in Texas, even though we know we have sanctuary cities in Texas.”

Schaefer said he was surprised that the bill, which banned sanctuary cities, passed.

“Me and another colleague in the Freedom Caucus, we, by amendments, we strengthened that bill, and it was huge,” Schaefer said.

Working to get a conservative speaker will be a top priority for the caucus going forward, he said.

“Step one is making sure that Republicans vote to select our speaker nominee within the House GOP Caucus,” Schaefer said. “The Texas Freedom Caucus has already made great progress toward that goal, and we expect the GOP caucus will formally adopt a procedure to conduct that vote. After we nail down the right process, we can focus on the right person.”

The description of Texas’ 6th district has been corrected in this article.