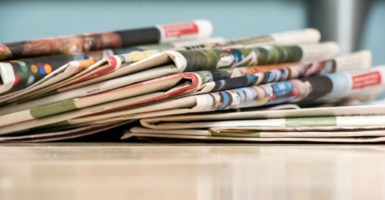 The FCC put an end to decades-old rules on Thursday that made it difficult for newspapers to adapt to the 21st-century media context. (Photo: iStock Photos)

On Wednesday, the Federal Communications Commission—led by Chairman Ajit Pai—put a long-overdue end to a set of FCC rules that limit ownership of media outlets in America.

The most controversial of these was a 1975 rule banning newspapers from owning broadcast stations. (The FCC also repealed a similar rule limiting TV and radio cross-ownership).

Predictably, the decision has been met with outrage by supporters of regulation, who say the decision imperils consumers and their access to information. They could not be more wrong.

In their action on Wednesday, Pai and the FCC simply recognized that the media world does not look at all like it did in the 1970s, and ignoring this fact only puts unnecessary burdens on struggling media trying to survive.

While Pai has earned a reputation as a foe of overregulation—famously vowing at one point to take a “weed whacker” to unnecessary rules—this was no rash decision by the FCC. The agency in fact has been considering the need for these rules almost continuously since 1996.

During that time, it has become abundantly clear to anyone with a computer or a phone that these rules were written for a media world that no longer exists.

As Pai put it recently, the now-repealed rules presumed that “the marketplace for news is defined entirely by pulp, rabbit ears, and transistor radios.”

But that marketplace, if it ever existed, was toppled long ago by new technologies and new choices for consumers, as anyone with a PC or a phone already knows.

The challenge for consumers has been more over how to sort through the mountains of information presented to them, rather than how to access more content.

At the same time, “old” media has been in freefall. Newspaper circulation in particular has plummeted, with print newspaper advertising dropping 50 percent since 2008. Hundreds of daily papers have closed their doors, with many of the rest no longer publishing on a daily basis.

At the same time, broadcast television has moved from an essential outlet to one among many distribution systems for news and entertainment.

The power over information that the FCC’s rules were meant to control simply is no more. In today’s marketplace, the old media is threatened rather than threatening.

But rather than help newspapers and broadcasters attempt to right their ships, the FCC’s restrictions make it harder to do so by making it impossible for them to combine their resources to compete in the marketplace.

The FCC deserves kudos for standing up to controversy and acknowledging the undeniable: The media world of the 1970s has been erased forever. And the government red tape made for that world should be erased as well.