On Tax Reform, This Communications Giant Puts $1B Where Its Mouth Is 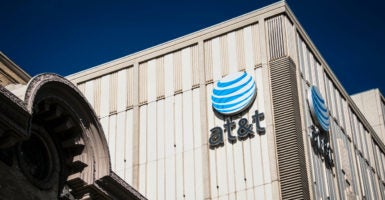 One of the nation’s largest wireless broadband providers has committed to investing $1 billion in the economy if Congress cuts corporate taxes.

“By immediately lowering the corporate tax rate to 20 percent, this bill will stimulate investment, job creation, and economic growth in the United States,” Randall Stephenson, chairman and CEO of AT&T, said last week.

House Speaker Paul Ryan, R-Wis., welcomed AT&T’s announcement Tuesday night at a town hall on tax reform with Fox News Channel in Herndon, Virginia, saying at one point that cutting taxes on businesses will “get our economy growing faster.”

.@SpeakerRyan to student on #GOP tax plan: “The whole purpose of all of this is to get our economy growing faster.” pic.twitter.com/zSUCiUvxC5

House Republicans’ tax reform plan, released Nov. 2 by Ryan along with Rep. Kevin Brady, R-Texas, chairman of the House Ways and Means Committee, and other GOP leaders, would cut the corporate tax rate from 35 percent to 20 percent. It also would provide for full expensing for businesses’ capital investments such as buildings and equipment.

The House GOP plan also would condense the current seven tax brackets to three, nearly double the standard deduction, and cap the amount taxpayers can write off in state taxes at $10,000.

“With a rate of 20 percent combined with provisions for full expensing of capital expenditures for the next five years, we’re prepared to increase our investment in the United States,” Stephenson said in AT&T’s announcement, adding:

If the House bill is signed into law, we’d commit to increase our domestic investment by $1 billion in the first year in which the new rates are in place.

“Research tells us that every $1 billion in capital invested in telecom creates about 7,000 good jobs for the middle class,” he said.

“AT&T’s pledge is just one more data point to show that business tax reform will indeed lead to more American jobs and higher wages,” Michel said in an email to The Daily Signal, adding:

This corroborates a recent survey of business leaders that found 82 percent of CEOs said tax reform means companies [will] increase their investments, and 76 percent of businesses plan to increase hiring if tax reform goes through.