Why the Left Has Been So Wrong About the Trump Boom 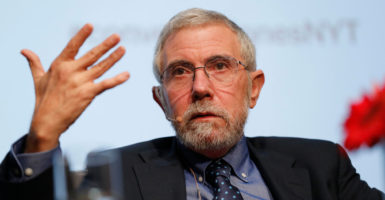 Time magazine’s cover story for the week of Nov. 6 is a classic. It blares: “The Wrecking Crew: How Trump’s Cabinet Is Dismantling Government As We Know It.”

The New York Times ran a lead editorial complaining that Team Trump is shrinking the regulatory state at an “unprecedented” pace.

Meanwhile, last week the stock market raced to new all-time highs; we had another blockbuster jobs report with another fall in the unemployment rate; and housing sales soared to their highest level in a decade.

Are the editors at Time and the Times so ideologically blinded that they are incapable of connecting the dots?

The U.S. economic revival of 3 percent growth has already defied the predictions of almost every Donald Trump critic.

I vividly remember debating Hillary Clinton’s economic gurus during the campaign: They accused Trump and advisers such as myself of “lying” when we said that pro-growth policies would speed up economic growth to 3 to 4 percent.

Jason Furman, who chaired the Council of Economic Advisers under President Barack Obama, told reporters earlier this year that the chances of reaching 3 percent growth over a decade were about 1 in 25—which is what many political experts said was Trump’s chance of winning the election.

Larry Summers, a top economic adviser to Obama, questioned the “standards of integrity” of the Trump economic team’s forecast for 3 percent (or more) growth. “I do not see how any examination of U.S. history could possibly support the Trump forecast as a reasonable expectation,” he wrote in The Washington Post.

Congress weighed in, too. “This budget relies on absurd economic projections and pretend revenues that no credible economist would validate,” Rep. Pramila Jayapal, D-Wash., announced at a House budget hearing.

Admittedly, we shouldn’t read too much into six months of very good economic data (with 3 percent growth) or the booming stock market. These trends can always reverse course quickly. Trump’s more restrictive policies on trade and immigration could harm growth potential.

But so far the Trump haters have missed the call on the economy’s trajectory. Doubly ironic is that the same Obama-era economists who are trashing Trump’s increasingly realistic forecast of 3 percent growth are the ones who predicted 4 percent growth from the Obama budgets.

Obama never came anywhere near 4 percent growth, and at the end of his second term, the economy grew at a pitiful 1.6 percent.

Under Obama, free enterprise and pro-business policies were thrown out the window. What was delivered was the weakest recovery from a recession since World War II, with a meager 2.2 percent average growth rate. Middle America felt it, which is why Trump won these forgotten Americans.

One reason that economist Larry Kudlow and I and others assured Trump that 3 to 4 percent growth was achievable was that Trump could capitalize on the underperformance of the Obama years.

Maybe the liberal economists and their shills in the media should show some humility. They should acknowledge they were dead wrong about how much Obamanomics was going to grow the economy and about how Trumponomics would crash the economy and the stock market.

Or better yet, maybe the rest of us should all just stop listening to them.