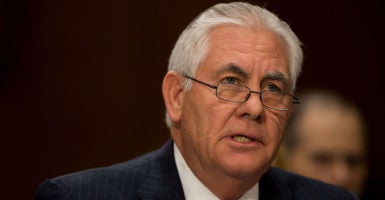 Diana Guevara is a member of the Young Leaders Program at The Heritage Foundation.

In his strongest denunciation to date, Secretary of State Rex Tillerson in mid-October condemned the atrocities committed against the Rohingya Muslims in Burma, holding military leadership responsible for that nation’s humanitarian crisis.

“What’s most important to us,” Tillerson noted, “is that the world can’t just stand idly by and be witness to the atrocities that are being reported in the area. … [I]f these reports are true, someone is going to be held to account for that.”

The ongoing persecution of Rohingya, a minority religious group in Burma, is not new. The Rohingya were officially denied citizenship after the passage of an exclusionary citizenship law in 1982.

Despite the fact that most Rohingya have lived in Burma (also known as Myanmar) for generations, the Burmese government calls them “Bengali,” a derogatory reference to their historically Bangladeshi lineage.

After having been denied citizenship, Rohingya experienced intermittent periods of violence. In 2012, violence broke out over the alleged rape and killing of a Buddhist woman by a Muslim man, which led to communal violence. Nearly 300 people were killed, and tens of thousands displaced in the aftermath.

Burmese military and Buddhist populations have pursued tactics of ethnic cleansing in response to the insurrection. Since then, it is reported that over 500,000 Rohingya have fled to Bangladesh.

Those who escaped to neighboring Bangladesh testify to the violence. Beyond the destruction of over 288 villages, Rohingyan men have been beheaded, women raped, and children brutally murdered. Burmese militants have even begun to place land mines along the Burma-Bangladesh border to prevent refugees from either leaving or re-entering.

Burmese officials have largely ignored the brutal attacks on the Rohingya. Burma’s security adviser, U Thaung Tun, addressed the United Nations Security Council on Sept. 29, rejecting the allegations of the heinous treatment against the Rohingya saying, “There is no ethnic cleansing and no genocide in [Burma].”

Thurain Thant Zin, Burma’s ambassador to Japan, echoed these same sentiments during a press conference in Tokyo on Oct. 12: “[T]o say the Myanmar military conducted those illegal acts is untrue and cannot be true. The Myanmar government protests the use of such terms as ethnic cleansing and genocide.”

Even Aung San Suu Kyi, leader of the National League for Democracy and Nobel Peace Prize laureate, faced criticism for her relative silence in the early days of the Rohingya conflict.

Now, in a move toward reconciliation, Suu Kyi is galvanizing international assistance and has promised to implement the findings from the Annan Commission report which seeks Rohingyan reconciliation.

During her address to the U.N. General Assembly on Sept. 21, U.S. Ambassador to the U.N. Nikki Haley requested that countries stop providing weapons to Burma over the grotesque treatment of Rohingya Muslims.

“We cannot be afraid to call the actions of the Burmese authorities what they appear to be—a brutal, sustained campaign to cleanse the country of an ethnic minority.”

The increasing death toll and hundreds of thousands of displaced Rohingya Muslims warrants urgent attention and action from the U.S. The U.S. should continue providing assistance to refugees in Bangladesh, and implore the Burmese military to stop violating human rights and killing the Rohingya.

Given the severity of the Rohingya crisis and slow pace of democratic reforms, The Heritage Foundation is currently compiling a report outlining the need for a shift in U.S. policy toward Burma.