3 Ways the House Republican Tax Plan Is Good for Farmers 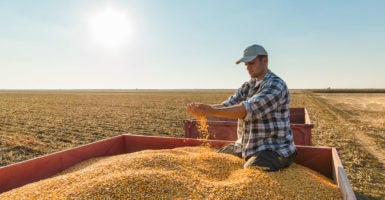 The House tax plan includes repeal of the estate tax, which has often made transferring farm property to the next generation difficult. (Photo: iStock Photos)

Many of the key changes made by the legislation would have a positive impact on farmers and ranchers. Here are just three of them.

1. Repeal of the Estate Tax

Under existing law, the federal government taxes the transfer of some property upon death. This is known as the estate tax, or more commonly, the “death tax.”

An estate must pay taxes when the assets exceed a specific dollar figure. In 2017, this dollar figure, referred to as the basic exclusion, is set at $5.49 million.

According to the House Ways and Means Committee, under the House tax bill, “the basic exclusion amount is doubled from $5 million (as of 2011) to $10 million, which is indexed for inflation.” After six years, the estate tax would be repealed. While it is true that a small percentage of farmer estates have to pay the estate tax—0.42 percent of farm estates pay it—this tax creates many perverse incentives.

Farmers who want to pass along their farm to relatives, which is commonly done, will take steps to avoid the estate tax. This might mean intentionally not growing the operation or spending money as opposed to investing.

Under existing law, businesses generally may only depreciate the cost of their capital investments (e.g. buildings, equipment) over time (as long as 39 years). Section 179 of the tax code currently allows farmers (and other businesses) to expense certain property (including tangible personal property) of up to $510,000 in 2017.

Full expensing would allow a business to immediately deduct all of its capital expenses from its taxable income. The House tax bill would allow full expensing of certain capital investments. Section 179 expensing would now cover property of up to $5 million (as opposed to $510,000 in 2017). Both of these changes would sunset in five years.

As with other businesses, farmers can benefit from full expensing and Section 179 changes by being able to immediately write off expenses, thereby encouraging investment. In addition, farming can be very capital intensive.

Pass-through businesses refer to businesses such as sole proprietorships, partnerships, S corporations, and other businesses in which income is passed through to the owners of the businesses. They do not include the traditional corporation.

The current tax rate on pass-through businesses is based on individual income tax rates imposed on the owners of the businesses. This rate can be as high as 39.6 percent, which is the top individual marginal rate.

The Tax Cut and Jobs Act would lower the tax rate on “business income” (not wage income) to 25 percent. This change would be particularly helpful to farmers because almost all farms are formed as pass-through businesses (more than 94 percent of all farms).

Helping Agricultural Producers, and All Americans

If enacted into law, these three changes could make a significant difference for farmers and ranchers. The benefits are by no means limited to agriculture, though. Other taxpayers would benefit as well, as would the economy as a whole.