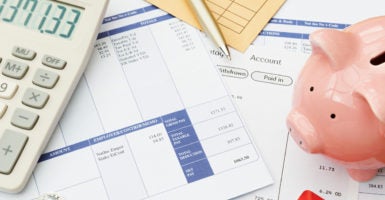 “You know what I am really excited about?” Pennsylvania state Rep. Seth Grove says. “The fact that the federal government is just talking about giving money back to its people.” (Photo: Ingram Publishing/Newscom)

Repealing the state and local tax deduction on federal income taxes is critical to boosting the economy, a state lawmaker from Pennsylvania says.

“I think if you look at the general principle of tax reform, it is not for more spending in government. It is actually to incentivize our economy and grow our economy,”  state Rep. Seth Grove, R-Dover Township, said Monday at a tax reform discussion at The Heritage Foundation, adding:

As a state legislator [whose state] hit an economic slump last year, you know, Pennsylvania is still not kind of out of the recession … it is imperative that we continue to grow our economy, and by doing tax rate adjustments, broad-based tax reform, we’re able to get there.

The GOP tax plan released Thursday by Speaker of the House Paul Ryan, R-Wis., and other Republican leaders seeks to scale back the state and local tax deduction, which allows taxpayers who itemize instead of taking the standard deduction to deduct from their federal taxable income any property and income taxes paid to state or local governments, Adam Michel, a tax policy analyst at The Heritage Foundation, told The Daily Signal.

Eliminating the state and local tax deduction would provide roughly $1.3 trillion in new revenue for the U.S. government.

Some lawmakers, such as Rep. Peter King, R-N.Y., have come out against eliminating the state and local deduction. They say that would be unfair.

“[L]awmakers from high-tax congressional districts, such as in New York, say taxpayers count on the deduction and would have to pay more in federal income taxes if Congress scraps it,” King said Sunday on ABC’s “This Week.”

“This bill, by taking away the state and local tax deduction, has a particularly devastating effect on New York and New Jersey,” King said.

But another panelist at the Heritage event, Jonathan Williams, chief economist and vice president at the Center for State Fiscal Reform of the American Legislative Exchange Council, said repealing the state and local tax is an issue of fairness for taxpayers.

Millionaires are those who benefit most from the deduction, said Rachel Greszler, research fellow in economics, budget, and entitlements at The Heritage Foundation.

“You have millionaires in California and New York who are deducting close to half a million dollars in state and local taxes that they are paying, and they are getting about a $200,000 reduction in their federal tax bill because of that,” Greszler said, adding:

That’s not something that the federal government needs to be supporting and subsidizing and maintaining. It would be … better off getting rid of  those things and lowering the tax rates.

Grove said he is hopeful for the positive change tax reform would bring, if passed.

“You know what I am really excited about? The fact that the federal government is just talking about giving money back to its people. It’s been an exciting conversation I’ve been waiting for for a long, long time,” Grove said.