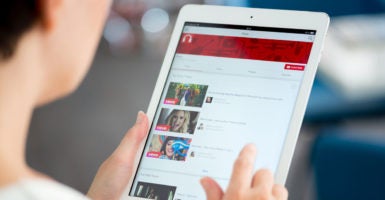 After watching YouTube block dozens of its videos, the folks at PragerU are convinced the company is policing views. (Photo: iStock Photos)

“We believe everyone should have a voice,” YouTube has said. Everyone, it seems, but conservatives.

The internet’s biggest video warehouse isn’t exactly new to the censorship debate. After run-ins with Lila Rose, David Daleiden, and other pro-lifers, people were already suspicious that YouTube was picking sides in the culture debates. Now, after watching YouTube block dozens of its videos, the folks at PragerU are absolutely convinced the company is policing views.

Founded by popular radio host Dennis Prager, PragerU has been producing “short, educational videos from a conservative perspective” for six years. Nothing about the footage has been remotely controversial—until now.

While they cover some of the hottest political topics, the videos try to present counterarguments to the left’s radical vision of America. Unfortunately, YouTube has gone out of its way to silence those views, shelving as many as 50 of Prager’s videos, including: “The Most Important Question about Abortion,” “Is Islam a Religion of Peace?” “Why America Must Lead,” “The Ten Commandments: Do Not Murder,” and “The World’s Most Persecuted Minority: Christians,” among others.

Before long, the company declared them “inappropriate” for young viewers—a decision YouTube insists wasn’t politically motivated. “Giving viewers the choice to opt in to a more restricted experience is not censorship. In fact, this is exactly the type of tool that Congress has encouraged online services to provide for parents and others interested in a more family-friendly experience online.”

But, as most people would agree, it’s one thing to block truly inappropriate content and another to decide that a conservative conversation about America is “unsuitable” for kids (or worse, “hate speech”). As Prager argues, “They are engaging in an arbitrary and capricious use of their ‘restricted mode’ … to restrict non-left political thought.”

Tired of the double standard applied by these online magnates, PragerU is suing YouTube and its parent company, Google, for trying to muzzle conservatives in an open forum.

“Watch any one of our videos, and you’ll immediately realize that Google/YouTube censorship is entirely ideologically driven,” Prager challenges. “For the record, our videos are presented by some of the finest minds in the Western world, including four Pulitzer Prize winners, former prime ministers, and professors from the most prestigious universities in America,” he points out.

For Google, these tactics are nothing new. Last year, the world’s biggest search engine made plenty of headlines for its promise to start combing the web for and cracking down on “hate speech.” “Sort of like spell-checker,” Google explained at the time, “but for hate and harassment.”

Apart from the obvious problems, conservatives had another legitimate concern: Who’s defining “hate?” Because if you ask many liberals, “hate” is believing in things the left says doesn’t exist—like truth.

In the end, this case is about a lot more than liberal or conservative politics. It’s about free speech. Obviously, many on the left are terrified that conservatives are making compelling, fact-based arguments on the issues of the day. So they will instead try everything—including gagging the opposition—to avoid open debate.