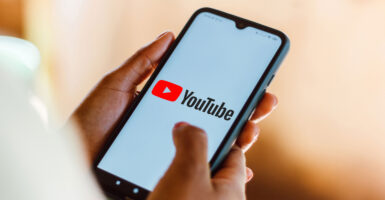 Following backlash from conservatives and lawmakers, YouTube reinstated the American Principles Project’s account Tuesday. Google told The Daily Signal that the decision to reinstate the Project’s account was made “upon review of their appeal” and that YouTube is working with the American Principles Project “to explain our policies so they can make the best decisions for their channel moving forward.”

Jon Schweppe, American Principles Project director of policy and government affairs, told The Daily Signal on Tuesday that the Project did not hear from YouTube for more than a day after it was informed that it had been terminated. YouTube ultimately reinstated the American Principles Project’s account and told the organization that it had been given a “warning strike.”

The platform banned “War Room” in January, a spokesman told The Daily Signal on Tuesday, saying that it repeatedly violated YouTube’s policies. The ban came after Trump’s former personal attorney, Rudy Giuliani, appeared on the podcast and said that “equal, if not more, responsibility” for the Jan. 6 Capitol riot should be placed “on the fascists” running the Democratic Party.

“I think we are going to have the discussion, ‘Is it OK that YouTube has decided to prevent anyone from posting a clip of that show, including elected officials that go on?’” Schweppe asked. “Could they be prevented from sharing with their constituents an interview they did with a popular conservative show, one of the more influential shows in the country?”

The American Principles Project has released a number of projects, ads, and campaigns over the past several years defending the family and fighting back against left-wing gender and critical race theory concepts in education.

“Although we are pleased that American Principles Project’s YouTube account has been reinstated for the moment, the actions which YouTube has taken over the last couple days have exposed some disturbing problems with how it moderates its platform,” Schilling said in a Tuesday statement.

The American Principles Project president said it is “totally unacceptable” that YouTube would suspend the account without prior warnings or immediate explanations.

“This complete lack of transparency around actions which severely restrict an organization’s ability to reach supporters is, at the very least, highly unethical and unfair,” he added.

“By all accounts, YouTube did not remove our videos because of anything specific in those videos,” the American Principles Project president said. “They stated, rather, that our posting of a clip from ‘War Room’ itself constituted a violation of their ‘Community Guidelines.’”

“This is absurd,” Schilling continued. “Enforcing a blanket censorship of an extremely popular conservative show, regardless of the content of any particular clip from that show, is an affront to values which underpin the First Amendment. These actions are, in a word, un-American.”

The American Principles Project president urged Congress to “even more strongly address Big Tech censorship,” warning that Google is “wielding this power in such an arbitrary and obscure way [that] should frighten every American who cares about the continued existence of our free society.”

YouTube has repeatedly been accused of censoring conservatives. In June 2020, YouTube removed a video posted by The Heritage Foundation of Walt Heyer, a biological man who formerly lived as a transgender woman, saying that the video violated its “hate speech policy.” The video remains censored.

“The APP is right to cry foul,” she added. “Users need transparency into the rules, notice before their content or account is taken down, a legitimate explanation for the violation notice, and a real avenue for recourse. Any unfair or deceptive practices against consumers by such companies should be investigated by the Federal Trade Commission.”