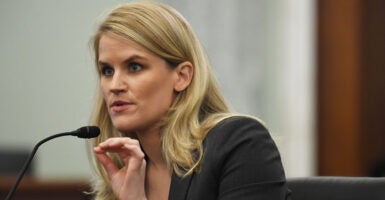 Facebook "whistleblower" Frances Haugen testifies before a Senate Commerce, Science, and Transportation subcommittee on Oct. 5. Haugen left Facebook in May and provided internal company documents about the tech giant to journalists and others, alleging that Facebook consistently chooses profit over safety. But some have questioned her motivation for doing so. (Photo: Matt McClain/Getty Images)

With this razzle-dazzle, the witness and her handlers want the audience to use the pretext of child protection to increase government power over Facebook, resulting in increased censorship, which likely will inure to the detriment of conservatives in the long run.

To identify—and avoid—the key takeaway of the hearing, members of Congress and the American public need to see through the glossy performance and focus on Haugen’s former role at Facebook and what she advocated for in the hearing; namely, more censorship of “misinformation.”

On the plus side, Haugen released Facebook documents and described troubling issues at the tech giant that are important for Americans to know and understand.

In its never-ending quest for growth, Facebook preys on younger children to set their eyes on the Instagram and Facebook platforms and to keep them there, despite knowing the dangerous—and even deadly—mental and emotional downstream effects that has on children, particularly girls.

He added, “The damage to self-interest and self-worth inflicted by Facebook today will haunt a generation.” He’s right.

Investigating Facebook and other Big Tech companies for misleading consumers and advertisers, and for deceptively misrepresenting their products, is an available course of action for the Federal Trade Commission under current authorities, and the FTC should utilize them.

Blumenthal and Sen. Maria Cantwell, D-Wash., both spoke at Tuesday’s hearing in favor of investigating and penalizing Facebook for such deception.

Facebook and other Big Tech companies warrant such scrutiny, transparency, and consequences based on any deceptive business practices.

A second overdue change discussed at the hearing was reforming Section 230, which provides internet service providers overbroad liability immunity for removing legal content that they consider “objectionable” from their platforms, and giving them a free pass for altering content posted by others by adding “truth banners” and the like while still claiming—falsely, in our view—that they are not “publishers” of the content on their platforms.

Companies should not be immune from lawsuits against this behavior when they are clearly acting as publishers.

But government should not encourage or expand the current favorite tool of the left, companies such as Facebook, and Haugen herself; namely, identifying and removing “misinformation.”

Haugen was the lead product manager for “Civic Misinformation” at Facebook. She explained that Facebook changed its content defaults in the summer of 2020 for health (COVID-19) and civic (election) content because it knew “dangerous” content related to those issues was on the platform.

Haugen complained that after the election, Facebook returned to its prior content default settings to resume platform growth. She testified that Facebook betrayed its commitments to keep elections safe when it dissolved her civic integrity unit after the 2020 election.

Sen. Amy Klobuchar, D-Minn., advocated for her legislation to hold digital platforms accountable for health misinformation posted online. Haugen lamented that Facebook does not have the capability to prevent COVID-19 misinformation because it overrelies on artificial intelligence to catch such content, and AI only catches a small fraction of it.

Americans should have visceral reactions against efforts to label and censor “misinformation.” COVID-19 and the 2020 election have shown that such labels are often proven wrong and that “misinformation” is a euphemism for content the left does not like or want shared.

Two prime examples were the Wuhan, China, lab being the source of COVID-19 and the Hunter Biden laptop. News of the latter was likely suppressed by Haugen’s own team.

Haugen testified that Facebook wants to trick Congress into making limited changes and that company representatives use false choices—such as divisive content or losing free speech—to scare off significant reform.

Yet Haugen seeks to perpetuate dangerous censorship of lawful content regarding issues in need of open debate on all platforms.

Americans need to see through this setup of a “whistleblower” hearing and avoid being tricked into weaponizing so-called “misinformation” labeling and censorship.