Georgia Moves to Protect Conservatives, and Others, From Big Tech Censorship 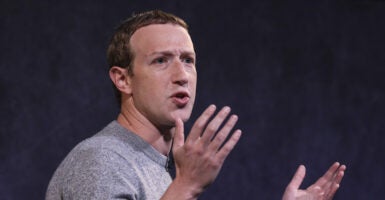 Unelected tech arbiters such as Facebook CEO Mark Zuckerberg have censored conservatives for too long. A Georgia bill looks to punish them for doing so. Pictured: Zuckerberg speaks about a new Facebook feature on Oct. 25, 2019, at The Paley Center for Media in New York City. (Photo: Angerer/Getty Images)

In the face of Big Tech’s overwhelming censorship of conservatives, states are beginning to take matters into their own hands.

The Georgia Senate last Tuesday passed SB 393, a bill that would prohibit social media platforms such as Facebook and Twitter from deleting posts and banning users who live or work in Georgia based solely on their views.

If social media users believe that they’ve been unfairly censored or discriminated against based on their views, Georgia’s proposed Common Carrier Non-Discrimination Act would allow users to sue those platforms.

To ensure that Georgia’s legislation isn’t simply a paper shield, it contains enforcement mechanisms that would require Big Tech companies to report every six months on a variety of metrics. For example, companies would need to report how often potentially illegal content cropped up on their sites and how many times they removed or suspended users and content.

The Atlanta Journal-Constitution quoted state Sen. Greg Dolezal, a Republican who sponsored the bill, as saying: “What we are stating here is that you cannot be discriminated against for your viewpoint, for your gender, for your age … in this 21st-century public square.”

In a tweet posted earlier this month, Senate Majority Leader Mike Dugan, a Republican, said: “Georgia is about to be the first state in the nation to empower users of social media platforms. By passing SB 393, we are ensuring Georgians are not unfairly targeted for their personal ideologies.”

What Dugan and Dolezal are doing in Georgia is a good start. The fight to preserve free speech online should be fought in the states. And there already is precedent to suggest that when conservatives attack Big Tech at the state level, we can win.

The Florida law is more specific than the Georgia bill because it provides means to fine tech companies only when they deplatform candidates during election season. Both the Florida law and the proposed Georgia law give social media users the power to sue Big Tech companies if overzealous censors trample conservatives’ free speech rights.

But where the Georgia bill really shines is in requiring transparency reports. Big Tech companies can hide behind veils of secrecy and excuses when asked to justify sweeping bans of conservative individuals. By compelling companies to record and report their censorship, users of social media would gain an indisputable paper trail proving that Big Tech actively censors voices from the right.

Too often, Big Tech companies hide behind their algorithms to justify censorship. Yet programmers and other personnel dictate the design and implementation of those algorithms. Users have a right to information on this main ingredient of the product they use. …

Transparency reports should include detailed impact assessments of how these companies’ algorithms operate and affect users, including details on the impact of any ad hoc changes within reporting periods.

Georgia will be a fascinating test case in the fight against overwhelming suppression of information by Big Tech. The “laboratories of democracy” theory of federal and state power applies strongly here.

Americans rightly concerned with the censorious nature of tech giants will watch with bated breath how the Georgia legislation, if signed into law, serves at protecting speech online. If it works, other states can use it as a model for their own battles against Big Tech.

Platforms such as Facebook and Twitter will continue to try to silence conservative voices. But thankfully, Georgia’s bill and others like it will give consumers and users the tools to fight back.