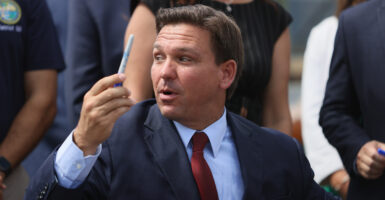 Florida Gov. Ron DeSantis—seen here In Miami on Monday giving away a pen after signing bills to combat foreign influence and corporate espionage in the state—recently also laid down the law against Big Tech's censorship in the state. (Photo: Joe Raedle/Getty Images)

Florida Gov. Ron DeSantis recently signed a bill on targeting social media platforms, such as Facebook, YouTube, and Twitter, for their repeated and aggressive suppression of conservative speech.

The legislation would fine social media companies if they deplatform candidates for state office during election season, as well as make it easier for private citizens to sue tech giants.

DeSantis has firsthand experience of tech companies censoring content for arbitrary reasons. Back in April, the governor posted a town hall meeting featuring doctors from Oxford, Stanford, and Harvard medical schools on YouTube.

In response to a question from DeSantis on the need for children to wear masks, the doctors all agreed that it was unnecessary.

YouTube promptly took the video down for “medical misinformation,” then issued a statement saying it wasn’t politically motivated.

That convinced exactly nobody, since YouTube already had a reputation for banning conservative speech it doesn’t like for the most spurious of reasons.

Conservatives have already begun hitting back against tech giants on an individual level. One example is commentator and comedian Steven Crowder, who recently announced he would be suing YouTube over its inconsistent and targeted enforcement of its rules.

As Heritage Foundation research fellow Kara Frederick explained, “In March, YouTube demonetized Crowder’s channel and issued his first demerit of 2021 on grounds that one of his videos contained COVID-19 misinformation. In April, Crowder earned ‘strike two’ under the pretext of harassment and cyberbullying. One more infraction in the designated 90-day window, and he will be permanently cut off from his 5 million YouTube followers.” (The Daily Signal is the news outlet of The Heritage Foundation.)

While the individual actions taken by conservatives, such as Crowder, are a start, what Florida is doing will set the tone for how conservatives fight back against Big Tech on a bigger and more organized scale.

Censorship by social media platforms is an existential threat to the conservative movement, but the movement has struggled thus far to coalesce around a single solution. This difficulty of finding standardized solutions is why bills such as the one DeSantis signed May 24 are useful.

The battle to preserve conservative voices online must be fought on many fronts. In addition to the individual level, free markets must also be involved.

There are private businesses that exemplify this principle of free market solutions. For example, Right Forge is a data-hosting company that refuses to take down content that isn’t explicitly illegal, and has a set of core principles based on the Constitution. Likewise, content platform Locals allows brands and creators to upload and manage their own community of supporters, with minimal interference from the larger platform.

As the tech giants continue to strangle dissent, disgruntled lovers of free speech will create platforms that value liberty of expression. Companies that value free and open expression should receive conservative support, as that will begin to put pressure on platforms such as Twitter or Facebook to respect those values or lose conservative support.

But just as importantly as individual or free market efforts, the fight to protect conservative speech should be waged in the states.

The states, unlike the overly broad and all-encompassing federal government, can be localized test sites for the most effective solutions to censorship.

Conservatives can see what policies are the most effective at holding tech companies to account, keeping them transparent, and preventing social media companies from abusing their power over public discourse.

The war to preserve conservative thought and speech on the internet will be long and grueling. It’s good that state governors, such as DeSantis, are leading the charge, telling YouTube and its ilk that the right will fight back.

Individuals and states must keep up the pressure. If we don’t, there might soon be no safe harbors left.