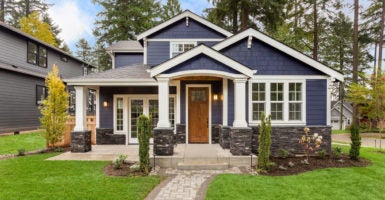 The property tax deduction encourages state and local governments to raise taxes higher than they otherwise would. (Photo: iStock Photos)

On the eve of the release of their tax reform proposal, GOP leaders are considering keeping the property tax portion of the state and local tax deduction as part of their plan.

This “compromise” could end up making home ownership less affordable for middle-income Americans.

As lawmakers debate which tax deductions to eliminate and which to keep as part of a pro-growth tax reform package, the deduction for state and local taxes has gained outsized attention.

A reported compromise would keep the property tax deduction in order to encourage lawmakers from high-tax states to support the overall tax plan. But the policy would only encourage state and local governments to raise their property taxes, hurting low and middle-income Americans, most of whom don’t deduct their property taxes from their federal taxes.

Most low- and middle-income households don’t itemize their deductions at all. This means that higher property taxes would not be offset with relief from a federal property tax deduction for many of the most vulnerable taxpayers.

According to the most recent IRS statistics, only 15 percent of taxpayers who make under $100,000 claim the property tax deduction, and on average, they deduct $3,400 in property taxes.

In contrast, 74 percent of taxpayers who make over $100,000 a year claim the property tax deduction and deduct an average of $6,600. The average millionaire deducts over $28,000 in property taxes.

While holding on to the property tax deduction would be a big win for wealthy taxpayers in high-tax states like New York, New Jersey, and California (where the average millionaire deducts $32,000 in property taxes), it would be a huge loss for most Americans because it would mean higher marginal tax rates.

If the final tax plan includes a doubling of the standard deduction, as included in current tax reform frameworks, even fewer Americans would benefit from a property tax deduction.

We estimate that doubling the standard deduction would reduce the percent of taxpayers who itemize from 30 percent to 16 percent, meaning even fewer low- and middle-income households would benefit from the property tax deduction.

The basis of pro-growth tax reform is fewer credits, fewer deductions, and lower tax rates. At an estimated cost of $1.3 trillion over 10 years, the state and local tax deduction is not only one of the biggest deductions, it’s also arguably the least defensible.

By allowing taxpayers to deduct their property and income or sales taxes, the deduction encourages state and local governments to raise taxes higher than they otherwise would because they can shift the burden onto non-state residents—that is, federal taxpayers.

Lawmakers from high-tax states—liberals and conservatives alike—who don’t want their subsidy for larger government taken away are putting up a strong fight against elimination of this tax subsidy.

Although the original tax package presented by conservative lawmakers would have eliminated the state and local tax deduction (and President Donald Trump strongly supported doing away with it), Ways and Means Committee Chairman Kevin Brady, R-Texas, has reportedly said the package will maintain a deduction for property taxes.

States could relieve wealthy taxpayers of their lost income and sales tax deductions by shifting more of their tax burden onto property taxes. This would, in turn, shift part of that burden onto federal taxpayers.

But this could make it harder for middle-income Americans, especially those on fixed incomes, to become homeowners as they are less able to pay higher property taxes.

Furthermore, keeping the property tax deduction would hurt all Americans by reducing the size of possible marginal tax rate reductions.

We estimated that eliminating the state and local tax deductions along with the municipal bond interest deduction would provide enough revenue to reduce marginal tax rates by as much as 16.4 percent.

Holding on to the property tax and municipal bond interest deductions as currently proposed would cut those reductions by more than half—to a maximum rate cut of 7.6 percent.

Giving up on significant middle-class rate reductions in exchange for holding on to wealthy tax breaks is the opposite of pro-growth tax reform.

Lawmakers must eliminate the state and local tax deduction in its entirety.

Halfway measures like keeping the property tax deduction will preserve most of the deduction’s high costs and detrimental outcomes, and will prevent all Americans from experiencing the benefits of lower marginal tax rates.