The Debt Limit Is Back. Why That’s a Good Thing 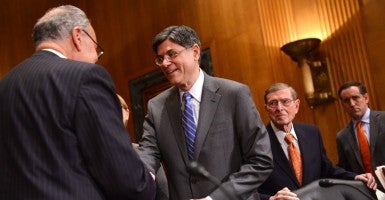 Debt limit panic is about to hit Congress. Treasury Secretary Jack Lew announced last week that the U.S. government may not have enough cash on hand by Nov. 5, 2015, to meet all of its payment obligations.

Congress could avoid repeated debt limit panics by acting prudently and with enough foresight to address the federal government’s spending and debt problems before the debt limit seemingly forces lawmakers to adopt bad policy. That hasn’t happened yet.

The federal government has been operating under a debt limit of $18.1 trillion since March 16, 2015, when legislation, passed more than a year earlier, specified that the debt limit would be reinstated. Before then, Congress and the administration were unconstrained by any debt limit, because both parties had agreed to suspend it. Let’s just say they issued themselves a waiver.

Once the debt limit returned, the Treasury began borrowing from certain accounts that are not subject to the debt limit in order to continue deficit-spending. Now that those “extraordinary measures” are about to be depleted, Congress’ debt limit avoidance strategy too is coming to an end.

Most in Congress hate the debt limit. The debt limit forces Congress to deal with the fact that spending is out of control and the federal government keeps piling debt onto younger generations. The public does not like debt limit increases, either, putting lawmakers in a tough spot.

Confronting lawmakers with the result of irresponsible spending decisions is one main benefit of the debt limit. Lawmakers don’t spend enough time acknowledging Washington’s spending addiction, and the debt limit reminds them.

The right solution would be for Congress to eliminate waste wherever possible and make commonsense reforms that modernize outdated entitlement programs. That’s hard but important work.

Congress should both modernize Medicare, Medicaid, and Social Security and empower people to exercise more choice in spending their health care and retirement dollars.

Congress’ budget resolution included some important reforms in this direction. However, without additional legislation to implement the reforms in the congressional blueprint, spending will continue to grow out of control. Lawmakers should address the key drivers of spending growth and put the budget on a path to balance—before raising the debt limit. Heritage’s blueprint for congressional action lays out that path in detail.